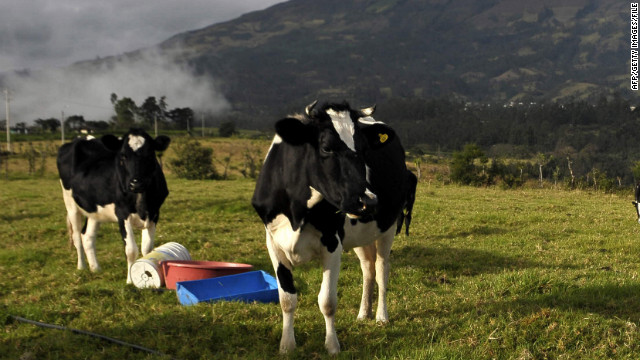 Why would Colombia's FARC sell cows?

Colombia's president said in a recent speech that the anti-government guerrilla group known as FARC is so strapped for money that its members have started selling cows.

The Revolutionary Armed Forces of Colombia "is designing a strategy to counter the problem of a lack of financing ... due to the blows that have been dealt to their financing sources, especially drug trafficking," PresidentÂ Juan ManuelÂ Santos said. "One of the orders that they have received is 'sell the cattle to get more resources.'"

But experts who study the rebel group that's tried for decades to overthrow the Colombian government point out that more may be happening than a desperate sale of livestock. Although Santos suggested that anti-narcotic measures have damaged FARC's ability to profit from drug trafficking, it's possible that FARC may be selling cattle to launder drug money, one expert said.

"It's a classic underworld tactic. If you own 40,000 heads of cattle, you take the proceeds from selling some of your cows and do whatever you like with the profits,"Â said Steven Dudley, the co-director of InSight, a joint initiative of American University in Washington and the FundaciĂłn Ideas para la Paz in Colombia. "This wouldn't be the first time this has happened, so to pretend that this is somehow new or reflective only of a government crackdown on FARC is ridiculous."

InSight monitors, analyzes and investigates organized crime in the Americas.

"No matter what is really going on with the cattle issue, I also don't doubt that FARC has been impacted seriously by government operations meant to cripple the group," he said.

FARC has recently lost several of its leaders, most significantly its commander, Alfonso Cano, who was killed in November. In September 2010, Colombian security forces killed another leader, Mono Jojoy. In December, the group suggested that it is willing to reopen talks with the government. In a statement signed by a FARC leader, the rebel group called on Santos to consider a "hypothetical negotiating table" to discuss privatization, deregulation and the degradation of the environment.

"This conflict will have no solution until our voices are heard. Without lies, Santos, without lies," the statement read.

"FARC has been under unrelenting military pressure for over a decade," said Cynthia Arnson, the director of the Latin American Program at the Woodrow Wilson International Center for Scholars in Washington. "But FARC is still an enormously wealthy insurgent organization because of revenues from the drug trade. It still retains a capacity to commit acts of violence and harm people."

FARC has carried out bombings, assassinations, hijackings and kidnappings against various targets in Colombia. The group's links to drug trafficking have netted hundreds of millions in profits, according the Council on Foreign Relations.