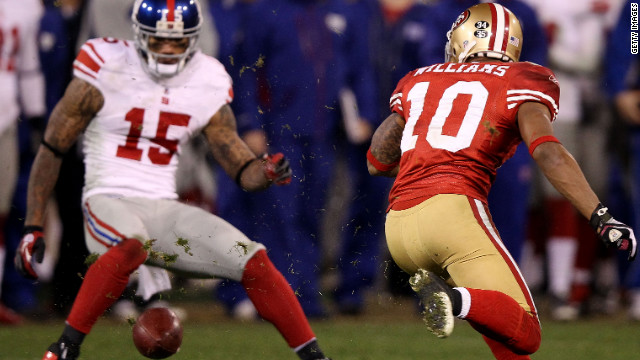 Kyle Williams fumbles in the NFC Championship on Sunday. Two Giants say they targeted Williams because of his concussions.
January 25th, 2012
03:28 PM ET

It’s a reality of sport, and not just football: If your opponents know you have an injury, they’re going to target it.

If a quarterback’s ribs are fractured, they make sure to put a shoulder right in his numbers. A pitcher in baseball may hurl the horsehide a little differently when a batter has a jacked-up wrist or hip. In hockey, soccer and basketball, a player with a tender elbow or knee can expect opponents to clip her or him on multiple occasions. And we’re not even going to discuss what happens to a boxer with a swollen eye.

But what about a brain injury? Is it different? Especially in the NFL, where concussions have become the cause du jour among those who say the game is too violent, is "headhunting" a player with a history of concussions the same as going after a quarterback’s sore hand?

The New York Giants are making this a prime topic for discussion after two players told the media after their NFC Championship win Sunday that they targeted punt returner Kyle Williams.

The San Francisco 49ers' Williams, of course, provided the biggest headlines in Sunday’s game, first by letting a punt graze his leg, and on a later punt return, by coughing up the football after a hit from linebacker Jacquian Williams.

(For what it's worth, Kyle Williams didn't get his bell rung on the play, an NFL rep said there were no illegal hits on Williams and a San Francisco newspaper flatly stated there was no evidence the Giants were aiming for the 23-year-old's noggin Sunday.)

The G-Men recovered both balls, ultimately resulting in half their points in a 20-17 overtime win. Some zealous tweeters quickly called for Kyle Williams' death.

Jacquian Williams said of Kyle Williams during a locker room interview, “We knew he had four concussions, so that was our biggest thing, to take him out of the game.”

It might’ve been written off as a slip of the tongue. Perhaps in the gleeful post-game atmosphere of the locker room, Jacquian Williams did not mean to say the Giants targeted Kyle Williams because of his past concussions.

Well, Devin Thomas put an end to any speculation when he told the Star-Ledger in Newark, New Jersey, that Kyle Williams was indeed a target because “he’s had a lot of concussions."

“We were just like, ‘We gotta put a hit on that guy.’ … (Tyler) Sash did a great job hitting him early and he looked kind of dazed when he got up. I feel like that made a difference and he coughed it up.”

Late Tuesday, Big Blue did a little backtracking as two of the team's more veteran players (Thomas has been in the league only four years, and Jacquian Williams is a rookie) told a Star-Ledger reporter they did not discuss in team meetings the prospect of targeting Kyle Williams.

“It’s not like we wasn’t trying to hit him,” defensive end Justin Tuck told the newspaper, adding that the team "was definitely trying to get a lot of hats on him" because the 49ers' starting punt returner was hurt, but "as far as trying to knock him out of a football game, no.”

Bouncing back from injury

Robinson was erroneously penalized on the play for a helmet-to-helmet hit, and Moten was later fined $7,500 by the league. Replays showed that Moten’s helmet hit Kyle Williams in the chin.

Kyle Williams, who was knocked out cold on the play, sat out the following week and held a press conference January 2 in which he told reporters, “I think I’m on track to be cleared” for the divisional playoff game 12 days later. He further said, perhaps unwisely, that though this was his fourth concussion, there were no lingering effects from the hit.

He even downplayed the gash on his chin as “a battle wound.”

“I think I’ll be ready,” he told the San Francisco Chronicle. “It’s just a matter of following the progression, the protocol. I’m getting my bearings back a little bit.”

The 49ers’ 2011 injury report makes no mention of Kyle Williams before the Seattle game, and the sixth-round draft pick saw limited action in 2010, registering only one reception in four games and fewer than 100 yards combined on his handful of kickoff and punt returns. It should be noted, however, that NFL injury reports are highly unreliable and that Kyle Williams missed part of his 2008 season at Arizona State after a concussion. It’s unclear when he suffered the other two concussions.

Kyle Williams ended up playing against the New Orleans Saints on January 14 but only returned one kick and one punt. He caught two short passes on six targets.

His stock rose the following week, not only because he made a key block on the game-winning touchdown but also because it was announced that wide receiver Ted Ginn Jr., the 49ers’ No. 1 punt returner, wouldn’t play against the Giants.

Though Kyle Williams had numerous questionable plays during the Giants game, many of them came before the Sash hit that Jacquian Williams cited. Days of rain prior to the game and 11-mph winds may have factored into his sloppy play.

As Sports Illustrated reported, “The second-year player had other rough moments: a fumble on a reverse that he fell on, a strange sideways diving catch on another punt that could have been disaster. In the rain and wind, it wasn't a fun day to be a relatively novice punt returner.”

Should he have been in the game?

Dr. Sanjay Gupta, CNN’s chief medical correspondent, said it’s impossible to diagnose Kyle Williams without seeing his medical records, but “many would argue that Williams should not have been playing in the first place.”

Gupta added, “The long term impact of these concussions is better known than ever before, and the picture is not pretty: permanent damage to the brain resulting in depression, anger and chronic memory loss.”

Certainly, the NFL said it is taking concussions seriously, especially after Ann McKee, a Boston University neurologist and neuropathologist who is a foremost expert on concussions, told a House committee in 2009 that the NFL needed to “take radical steps to change the way football is played.”

McKee told CNN in July that through her work at the Veterans Affairs Center for the Study of Traumatic Encephalopathy Brain Bank,

She has examined 80 brains belonging to deceased football players, hockey players, boxers and soldiers. An overwhelming majority of those brains were positive for chronic traumatic encephalopathy, a degenerative disease linked to brain trauma, she has said.

The league has since held conferences on helmet technology and last month began putting concussion-specific trainers on the sidelines at every game to monitor injuries. Last year, the NFL also moved the kickoff up 5 yards to diminish the instances of kick returns, widely considered one of the most dangerous plays because 11 defenders (10 if we’re discounting the kicker) roll down the field with a 70-yard head of steam and converge on the returner.

Moving the kickoff to the 35-yard line has resulted in a little over half of kicks being returned, as opposed to four out of five in 2010.

Is it enough? Depends on who you ask. Gupta, who is also the associate chief of neurosurgery at Atlanta’s Grady memorial Hospital, said, “While so many positive strides have been made to reduce brain injuries, mandate sideline exams, and sit players out – this story reminds us how difficult it will be to change the culture of football.”

That issue is at the heart of an upcoming documentary and ongoing lawsuits surrounding concussions.

Former Green Bay Packers running back Dorsey Levens is producing, “Bell Rung: An Alarming Portrait of Professional Football,” in hopes that players will be more candid with him about their injuries than they are with coaches, doctors and the media.

“There's a comfort level because I played the game - kind of been there, done that,” Levens told CNN in July. “I think one of the prevailing attitudes around the NFL, especially when people conduct interviews, is that reporters don't have a clue. I mean, it's not disrespectful, but if they haven't played the game, the respect is just not the same.”

CNN was granted access and sat in during filming as several players told Levens they didn’t believe the NFL was taking the issue seriously. One player told Levens that league warnings about illegal hits are routinely disregarded and that players lie about injuries because they want to play and get paid. Another player questioned how the NFL could fine him for a hit one week, then use footage of the illegal hit to advertise the following week’s game.

Levens and three other players filed suit last month against the NFL, saying the league failed to take action to protect players, failed to warn players of the dangers and hand picked doctors to misrepresent the effects of head trauma and concussions.”

Despite the suit’s harsh language, several players – the Pittsburgh Steelers’ James Harrison chief among them – proudly said they won’t change the way they play. This is football. They want to lay the boom. The fans want it. The league has always known it.

Look at some of the biggest defensive names in the history of football – Ray Nitschke, Mike “Mad Dog” Curtis, Deacon Jones, Dick Butkus, Ronnie Lott, Steve “the Smiling Assassin” Atwater, Lawrence Taylor, John Lynch – and they were all famed for their devastating blows on the gridiron.

Lott himself coined the term “woo lick.” Asked what the phrase meant, he explained it’s when you hit someone so hard everyone in the stadium goes, “Wooooooo.”

Dad wanted son to be bowler

Which brings us back to fellow 49er Kyle Williams, who may not have taken the dangers of concussions too seriously before entering the league in 2010, even if his dad did.

The son of White Sox general manager Ken Williams, Kyle played both baseball and football in college. His dad, who also played both sports at Stanford, would ask him after Arizona State football games if he could still walk, according to the Chicago Tribune.

“That's what I want to know,” Williams said. “That's a tough, tough sport.”

On the gridiron, the paper reported, the junior Williams seemed to put his teammates’ success before his own health.

“We have 100-some guys here all focused on one thing - getting to the national championship game,” he told the paper. “I'll trade a win for a concussion any day.”

Asked if he dreamed about his son being a modern-day Deion Sanders, Ken Williams was blunt: “I would prefer that he bowl … There's very little chance of concussion.”