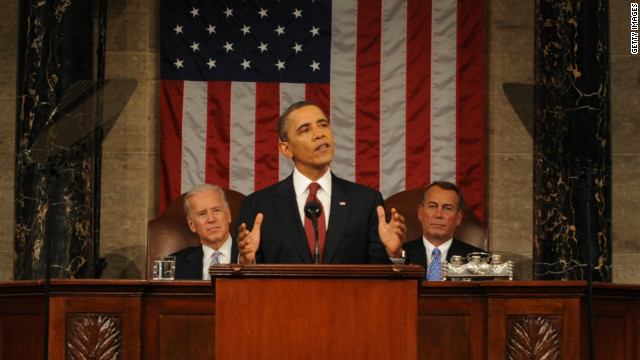 Thousands of comments poured in on CNN.com after President Obama delivered his State of the Union address Tuesday night.
January 25th, 2012
02:06 PM ET

Overheard on CNN.com: Some readers duel over campaign donations after speech

Among the thousands of comments and iReports that flooded in after President Barack Obama's State of the Union address, our readers have been talking about sending in donations to the candidate of their choice in response to the speech. Money in politics has been a hot issue recently, and CNN iReport has been asking people who've made small political contributions to share their stories, so it's been interesting to see that reflected in our story comments.

For example, take this exchange. Our commenters seemed to mostly support Obama's speech, but there was considerable opposition as well.

This poster claimed to be an independent who was swayed by the speech to the point of donating a few bucks.

fatcongress: "I'm a 34-year-old average American. I'm a very independent voter. In fact, I dislike the very premise of two-party politics. Doesn't make sense to me that anyone can fit my ideas and how I solve problems into either box A or box B. So this independent voter just donated $20 to the 2012 Obama campaign. I know what I heard tonight. I will pick wisely in my congressional elections. I want to carefully vote for my senators and reps. I've had enough baloney. Put some bills on the desk of the president. No more pork, and congress is king of pork. You're fired, Congress."

We saw some positive feedback on the speech, but it wasn't entirely a love-fest for Obama. Some aren't sure Obama's presidency is built to last. There were readers opposing Obama who pledged to donate to Newt Gingrich.

bluecorsair: "I'll be calling Newt with a donation, ... and the libbies wonder why people are calling Obama the food stamp president!"

A few commenters said they objected to some aspects of Obama's policies, but they did support his speech. Some were longer-term donors.

CashTheGreen: "I don't really like Obama. He's made some decisions I strongly disagree with, but one trend I've noticed over the last three years is, when I hear someone criticize him, they usually sound like they failed grade school. I mean, really, can't anyone make a logical argument without name calling and saying 'lib' every other word? At least his supporters don't sound like complete morons. The Democrats' arguments aren't always right, but they at least make sense."

DoNotWorry: "I agree. I didn't vote for him in 2008, for the first time I didn't vote at all. Reading the insane and ignorant comments, I found myself arguing for the President against ridiculous charges. When the Republicans showed their lineup, I donated for the first time ... to Obama. Tonight, I made my fourth donation to Obama. I disagree with a lot of his decisions, and I don't like the financial industry getting off without jail time, but I will vote for Obama in 2012. My first Democratic vote in 40 years."

There was also some backlash specifically targeted at Obama's small donations.

justoneguy62: "(Obama's) real urgency is making sure $5 donations (come in) through online campaigning and win his re-election. Come on people, all smoke and mirrors about everything he says."

But these readers talked about giving more weighty donations to Obama.

REMAKER: "Speechless ... just speechless. I have been sitting here since the President last spoke, reflecting, and I just donated $1500 to his campaign. I'm not rich, in fact, I'm just barely scraping by, but a President like President Obama makes me proud to be an American and gives me hope. Get the job done, Mr. President."

GhostColin: "If you have $1,500 to donate to a presidential campaign, you are not scraping by."

franny60: "Remaker, I've been donating $15 a month since he was elected, and I also intend to donate some more. He is one of the few who doesn't trash America, or Americans. He's also one of the few trying to initiate a jobs bill. He's done pretty good considering the hatred, and obstructive behavior of many in the Republican, and Tea Party. I'm very pleased he can keep his cool, and not get nasty. He's got class, intelligence, and more civility in his little finger compared to the whole bunch of Tea Party members. We need more Eisenhower Republicans, and less of the Nixon, Reagan and Bush. Where are those Republicans? Now they really loved this country!"

Some commenters cautioned that we should be careful about money in politics.

shalurkdows: "The only way for politics to work in this country is to get money out of politics. Either every campaign should have the same amount of money and the same amount of allotted air time, or one donation per person/corporation and no donations over, lets say, $1000 and complete transparency about where they came from."

What do you think about individual political contributions? Have you ever donated to a candidate, and why? Would you? Share your opinion in the comments area below and in the latest stories on CNN.com. If you donate to campaigns, tell us why via CNN iReport or sound off on video.