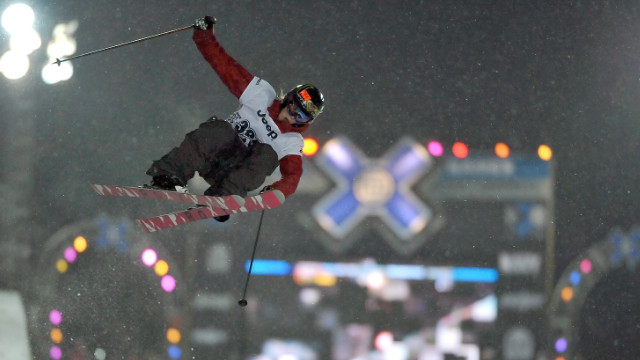 Just three weeks ago, Canadian freestyle skier Sarah Burke was preparing to defend her 2011 Winter X Games ski superpipe gold medal. On Thursday, athletes kicked off the 2012 event without her, memorializing the fallen skier with stickers, ribbons and a torchlit tribute.

Dozens of athletes with torches gathered on the top of a darkened Buttermilk Mountain halfpipe in Aspen, Colorado, and wordlessly skied to the bottom as part of a tribute during ESPN's Winter X Games broadcast Thursday night. Many then embraced Burke's relatives, who were waiting at the bottom.

See the Denver Post's video of the tribute

Burke, a four-time Winter X Games gold medalist credited with getting women's ski halfpipe into the 2014 Winter Olympics, died January 19 as a result of a training accident nine days earlier.

Thursday's tribute on the superpipe was part of a seven-minute segment dedicated to Burke on ESPN. A 90-second video showed performance highlights and old interview clips of the skier.

"She was a superstar with the humility of a rookie," one of ESPN's hosts for the Winter X Games, Sal Masekela, said before the video was shown. "She is the reason that women’s ski pipe is at Winter X, and why it will be in the Olympics in 2014. So if you are looking for her legacy, you will find it in all the faces that you see here tonight, and all those that line halfpipes and come-down mountains around the world for years and years to come."

Burke, 29, reportedly fell while trying a trick and "whiplashed" onto her side at the superpipe at Colorado's Park City Mountain Resort on January 10, officials have said. She ruptured a vertebral artery in the fall, leading to an intracranial hemorrhage that caused her to go into cardiac arrest at the accident site, according to a statement released by her publicist.

She was taken to a hospital, where she was put on life support and underwent successful surgery to repair the artery - one of four major arteries supplying blood to the brain - the next day, according to the statement. But after the surgery, tests determined she suffered "irreversible damage to her brain due to lack of oxygen and blood after cardiac arrest," the statement read.

People flooded Burke's Facebook page with messages of support after her fall and mourning after her death. A website raising money for Burke's medical bills, memorial costs and future foundation has raised more than $290,000.

X Games participants are honoring Burke with red "Celebrate Sarah" stickers on their equipment, and purple ribbons on their clothes, according to ESPN. And after Canadian Kaya Turski won Thursday's ski slopestyle gold medal - her third straight X Games gold in that event - she told ESPN that Burke was in her thoughts while she competed.

“I always looked up to Sarah. I always will look up to Sarah," the 23-year-old Turski said. "Before every run, actually, on my way into that first rail, I said, ‘Let’s do this, Sarah. I know you’re with me.’ She led me all the way.”

Burke, a native of Ontario who lived in British Columbia, was 11th in the Association of Freeskiing Professionals overall rankings last year. She won gold at the 2005 world championships in Finland and in 2007 received ESPN's Best Female Action Sports Athlete award.