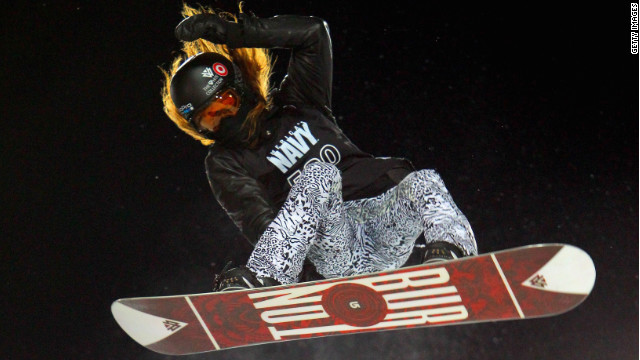 Shaun White flies above the superpipe in Aspen, Colorado, Sunday night en route to a perfect 100 score and a gold medal.
January 30th, 2012
11:17 AM ET

The Winter X Games wrapped up in Aspen, Colorado, on Sunday night with two of the most buzz-worthy moments we've seen in the 16 years of the competition: a perfect score from one of the games' most famous and most decorated participants, and a first-ever feat in the admittedly short history of flying snowmobiles.

First, Shaun White. The two-time Olympic gold medalist added to his impressive haul of Winter X Games gold, this time in mint fashion on the snowboard superpipe, posting the first perfect score ever recorded at the Winter X Games.

White has won 17 medals - 12 of them gold - but Sunday's performance surprised even White himself, as he'd come to the competition with a sprained ankle that forced him to miss the slope-style competition earlier in the games, and doubting if he'd be able to try the superpipe.

In fact, he said he spent time before Sunday night's finals dunking his ankle alternately in buckets of hot and cold water to ease the swelling. And it worked.

"I got here and I said 'Wow, it feels better than this morning,'" White told reporters.

White locked up the gold with his first of three runs, wiped out on the second, sustaining a black eye in the process, and then put it all together for the final.

"I just came through and everything felt perfect," he said.

"I've been to so many X Games now and I will forever remember this getting that perfect score," White said.

Earlier, it was Heath Frisby earning gold by becoming the first participant ever to flip a 400-plus-pound snowmobile headfirst and bring it down to a perfect landing.

Frisby saluted family and friends for supporting him in attempting the stunt.

"My whole family, everybody, all my friends have been behind me through all this," ESPN.com quoted him as saying. "I know my grandma is watching - she must have gotten a little chill there. Grandpa, I love you, man. We got it. We got it."

Later he tweeted: "I can't even express how thankful I am that I have all you awesome friends and family. Going to bed I'm sore and feel a bit concussed."

Before even trying his trick, Frisby had to watch competitor Justin Hoyer suffer a crash that sent him to the hospital.

"Guys, it's all right, I've been waiting a year to do this. I am my own deal. This is a totally different trick and I'm ready," Frisby said then, according to ESPN.com.

The Games closed with celebrations after White's perfect run, but they opened on a more somber note, in remembrance of freestyle skier Sarah Burke, who died after a training accident earlier in the month.

Host Sal Masekela said the final night was what Burke was all about.

"She's probably looking down at us right now and she's smiling that Sarah Burke smile because this right here," Masekela said pointing to the superpipe course, "this was the spirit of Sarah Burke."