Biden announces the return of seven Americans, including five of the six oil execs known as the "CITGO 6," who hadātwitter.com/i/web/status/1ā¦xL

The bodies of 22 civilians, including 10 children, were found following Russian shelling on a convoy of cars near tātwitter.com/i/web/status/1ā¦nR

Russian troops pull out of key strategic city of Lyman after being surrounded by Ukrainian forces, Russia's defenseātwitter.com/i/web/status/1ā¦cz

Dow ends the month down nearly 9%, its worst monthly drop since March 2020, when pandemic lockdowns started in theātwitter.com/i/web/status/1ā¦CT

Police are responding to reports of shots fired at a hospital in Austin, Texas. The hospital has been placed on locātwitter.com/i/web/status/1ā¦ut

House votes to fund government through December 16, averting a shutdown hours before a midnight deadline. The billātwitter.com/i/web/status/1ā¦qf 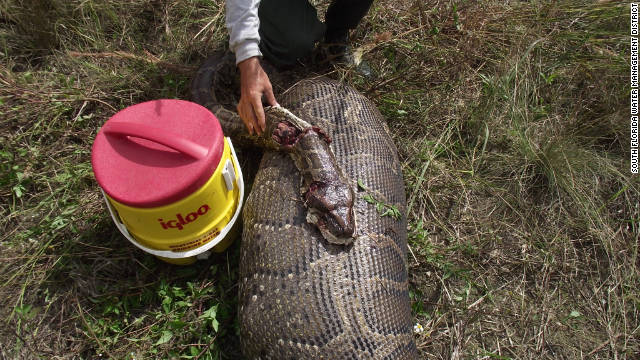 āPythons are wreaking havoc on one of Americaās most beautiful, treasured, and naturally bountiful ecosystems,ā said U.S. Geological Survey Director Marci McNutt in a statement.

Burmese pythons are native to southeast Asia, their range extending from southern China to the Malay Archipelago, according to the National Zoo. The snakes reach breeding age in four to five years and a female lays an average of 35 eggs during the spring breeding season, thoughĀ one snakeĀ may lay up to 100. Burmese pythons can live asĀ long as 30 years.

āSuch severe declines in easily seen mammals bode poorly for the many species of conservation concern that are more difficult to sample but that may also be vulnerable to python predation,ā Dorcas said in a statement.

āIt took 30 years for the brown tree snake to be implicated in the nearly complete disappearance of mammals and birds on Guam; it has apparently taken only 11 years since pythons were recognized as being established in the Everglades for researchers to implicate pythons in the same kind of severe mammal declines,ā U.S. Geological Survey scientist Robert Reed said in the report.

Earlier this month, the U.S. Fish and Wildlife Service instituted a ban on the importation of the Burmese python and three other nonnative constrictor snakes -Ā the yellow anaconda and northern and southern African pythons.

āThis severe decline in mammals is of significant concern to the overall health of the parkās large and complex ecosystem,ā Everglades National Park Superintendent Dan Kimball said in a statement. āWe will continue to enhance our efforts to control and manage the non-native python and to better understand the impacts on the park.ā

Biden announces the return of seven Americans, including five of the six oil execs known as the "CITGO 6," who hadātwitter.com/i/web/status/1ā¦j7
cnni

Biden announces the return of seven Americans, including five of the six oil execs known as the "CITGO 6," who hadātwitter.com/i/web/status/1ā¦j7
cnni

Biden announces the return of seven Americans, including five of the six oil execs known as the "CITGO 6," who hadātwitter.com/i/web/status/1ā¦xL
cnnbrk

3:12 pm ET October 1, 2022 RETWEET
The bodies of 22 civilians, including 10 children, were found following Russian shelling on a convoy of cars near tātwitter.com/i/web/status/1ā¦nR
cnnbrk

11:18 am ET October 1, 2022 RETWEET
Russian troops pull out of key strategic city of Lyman after being surrounded by Ukrainian forces, Russia's defenseātwitter.com/i/web/status/1ā¦cz
cnnbrk

10:49 am ET October 1, 2022 RETWEET
Dow ends the month down nearly 9%, its worst monthly drop since March 2020, when pandemic lockdowns started in theātwitter.com/i/web/status/1ā¦CT
cnnbrk

4:24 pm ET September 30, 2022 RETWEET
Police are responding to reports of shots fired at a hospital in Austin, Texas. The hospital has been placed on locātwitter.com/i/web/status/1ā¦ut
cnnbrk