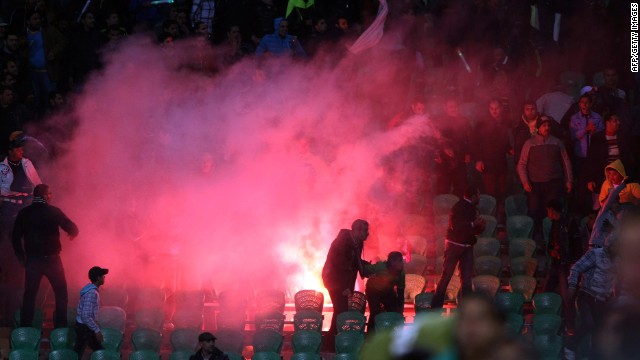 [Updated at 7:29 p.m. ET] Political tensions flared Wednesday after more than 70 people were killed and hundreds more were injured when fans rushed the field and rioted at a soccer game in Egypt.

It was unclear whether intense sports rivalries or political strife caused the clashes in the northeastern city of Port Said.

But hours after the fighting, protesters in Cairo chanted, "Down with military rule" and "Tomorrow we come, we take the military down." And the secretary-general of the Muslim Brotherhood party blamed Egypt's military for the deaths.

"There were organized groups in the crowds that purposely provoked the police all through the match and escalated the violence and stormed onto the field after the final whistle," Gen. Marwan Mustapha said. "Our policemen tried to contain them but not engage."

At least 47 people were arrested after the clashes, he said.