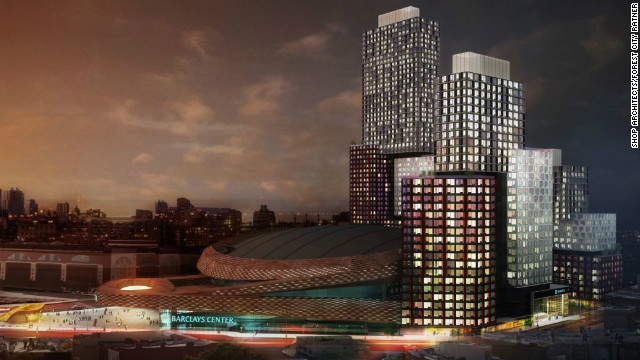 This rendering shows a proposed modular housing development that would stand behind the new Barclays Center in Brooklyn.
February 1st, 2012
09:26 PM ET

It's an idea that has the potential to revolutionize the construction industry: Use prefabricated modules to build more than 6,000 housing units. If the real estate development firm Forest City Ratner is able to turn the idea into a reality, the firm will build the tallest modular construction building in the world, a 32-story residential tower in Brooklyn, New York. 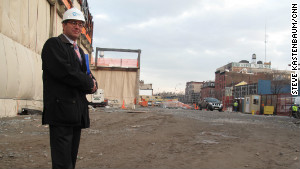 Forest City Ratner's director of construction, Bob Sanna, stands next to Brooklyn's Barclays Center arena, on the site where the company plans to build the tallest modular construction building in the world.

Prefabricated houses are not new. They've been around for decades. But modular construction today is principally used for low-rise buildings. Strong winds exert a tremendous amount of force on taller buildings, and lower floors have to support the weight of many floors above. With modular construction, the challenge comes in designing components that can withstand those forces and do it within a certain price range.

"I think we figured out a way to do this," said structural engineer David Farnsworth. He and his colleagues at the design and engineering firm ARUP spent two years researching and developing ways to build a high-rise modular building.

"The first challenge that we had to overcome was how can we make a modular system that can be built at height and withstand the wind loads," Farnsworth said. "You don't want the building to be moving too much in the wind that people feel it and then they get sick."

The other principal goal was to cut costs. "We think that modular saves something on the order of 20%,” Farnsworth said. In New York, the most costly U.S. city to build in, the potential savings are quite large.

Proponents of the idea believe the cost savings have the potential to spur construction in a market that has been stalled for years.

“At the moment, the market rates have come down and construction costs haven’t come down at the same rate for conventional construction,” said Farnsworth, who believes modular construction solves a financial equation. "This brings that ratio to a feasible range where it now can start to make sense to build more residential construction."

It could have huge implications when it comes to building affordable housing in high-cost cities like New York. A third of the apartments at Forest City Ratner’s project in Brooklyn are supposed to be affordable units.

The project, known as Atlantic Yards, was first slowed by several lawsuits, some filed by community groups opposed to the project. Then the bottom fell out in the housing market, the construction industry ground to a halt and financing for Atlantic Yards dried up.

While the centerpiece, an 18,000 seat NBA arena that will be the new home for the Nets, is nearing completion, the rest of the 22-acre site is largely quiet. Forest City Ratner’s director of construction, Bob Sanna, believes modular construction will change that.

"It's an evolution that our business needs to approach," Sanna said. "By having all the work going on in the factory, you can really control the amount of material you bring in and have it fabricated to the specifications you need without unnecessary amounts of waste."

When modules are put together in the controlled environment of a factory floor, work is not affected by unforeseen circumstances at the construction site.

"Labor wages are cheaper in a factory then they are on-site," Farnsworth said. "The weather comes into play on-site, whereas when you're doing the work in a factory, it can be storming on-site and you can still just be churning out the module work."

Farnsworth expects about 60% of the work to be done in a factory, everything from creating the frames for the modules to putting up drywall, laying floors and installing fixtures. Then, the finished modules will be trucked to the construction site, where cranes will stack them in place and attach them to a steel supportive structure.

"Anything that we can do to reduce the cost of construction is going to help in a very, very challenging situation for housing," said Richard Anderson, president of the New York Building Congress, an industry trade group. "They've agreed to quite a bit of affordable [housing] in their project. They've agreed to building union ... and now they're trying to make it work. Modular potentially is one way to help them make it work financially."

Forest City Ratner executives say modular construction has the potential to create more construction jobs in a slow housing market. But construction unions haven't exactly warmed to the idea yet.

"Insiders will tell you that they are afraid that the unions will not make as much money working in a factory as they would working outside in open construction," said reporter Theresa Agovino, who covers real estate for the publication Crain's New York Business.

Although Forest City Ratner is intent on building its factory in New York, labor unions are concerned that other developers could set up modular construction factories in places where labor costs are much lower and then ship the prefabricated units to more costly cities for assembly. High-paying construction jobs might be lost in that scenario.

"People are incredibly interested in what they are going to be doing," Agovino said about the project. "I know there is a tremendous amount of curiosity among other developers, architects, engineers about will they really in the end be able to do this."

Forest City Ratner would like to break ground on a 32-story modular construction high-rise apartment building in the spring.

"At some point, it’s inevitable that someone is going to bring pre-fabricated components from outside the city," Sanna said. "If we can create that kind of economic engine here, which I think we can, then why not do it?"

Confidence in the idea was recently bolstered by a project in Wolverhampton, England. A 25-story college dormitory was built out of 805 modules in just 27 weeks. It's the tallest modular building in the world. So far, it has been standing up in the wind just fine.