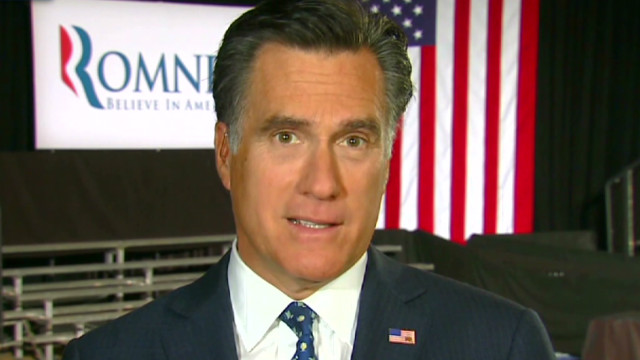 Mitt Romney won the Florida GOP primary, leading some to believe he's carrying strong momentum toward clinching the Republican Party nomination. In his speech afterward, he made comments about the poor, and many are wondering what he meant. William Bennett shared his opinion of Romney.

Does Romney have a real vision for America?

Romney said, "I'm in this race because I care about Americans. I'm not concerned about the very poor. We have a safety net there. If it needs a repair, I'll fix it." This started a huge discussion that even got into history.

lolz0rz: "Spoken as a truly educated and compassionate candidate, one horribly unfit for any office, least of all, as POTUS. This mas has failed in connecting with even the middle class family. It doesn't bother me as much that he was born with a silver spoon in his mouth and has had a cushion of wealth from birth to now, but because he cannot demonstrate and understanding of any people in this country outside his rich friends, it does not matter what his vision, clear or not, is. He is as undefined as his understanding of the people of this country and he does not deserve the right to run for office, of any kind."

MerlinX4: "You do realize that the vast majority of the Founding Fathers were rich, right? Imagine how surprised they would be to learn they did not deserve the right to found this country."

IdahoJ: "The difference in the wealth of the Founding Fathers and the wealth of politicians like Romney, is that the Founding Fathers put it all on the line. Not only their wealth, but their lives. Had the Revolution failed, all of them most likely have been imprisoned or put to death as traitors to the Crown. Not only that, but many did put their personal assets into colonies to form militia groups, civic projects and other worthy causes. Ben Franklin is one of particular note in this regard. In some cases, the money was never returned but they continued in 'the Cause' regardless. Romney and his ilk are nothing like the Founding Fathers and any comparison to them is poor judgement IMO."

This person said Romney has to offer people a reason to vote for him:

brianjfoote: "You can see the wheels turning as the GOP establishment sends out Mr. Bennett to promote Mr. Santorum in hopes of getting rid of Newt Gingrich.  Otherwise, should Santorum eventually drop out, most of his conservative base will go to Gingrich and make him once again competitive with Mr. Romney. But the gist of the story is that Romney needs to articulate something with respect to policy or vision or proposals or, frankly, anything.  To date all he has done is attack Mr. Obama, pausing only to attack any GOP candidate who might present a challenge.  Attack ads won't do it on their own.  Can anyone explain what Mr. Romney stands for (today, at least?) This suit is unlikely to present a serious challenge to Mr. Obama.  The only hope for the GOP is a brokered convention where they can draft an honest, sensible moderate.  Otherwise, we are looking at a repeat of the debacle of 1964, the last time the wingnuts were ascendant."

tinwatchman: "Things I will admit I *do* like about Romney: It is true that he worked very hard to make his fortune, and that the majority of it came from his own time in the finance industry. He seems to have done an okay job as governor in Massachusetts, from what I hear. I appreciate the amount of money he's given to charity. He at least seems like a decent person, and it's good that he has executive experience. But how the hell can any intelligent person think - after what happened during the housing crisis - that deregulation is the answer?"

But some commenters wrote about Newt Gingrich.

barrilete: "They say Romney has no vision, only because he doesn't spew out the first things that pop into his mind like most of his colleagues (lol, the moon). Paul knows what he wants and vocalizes it, it's too bad he has no chance (for that exact reason, ironically)."

Aml Maine: "Sure, Romney has a vision and it's not pretty for most of us. My many-years employer was a Bain victim ... er, client and I saw firsthand how the rigged games work. They 'consulted' to 'troubled' companies ... meaning they got in bed with the failed executives of companies not doing well and colluded with them to take control. In return, the execs got outrageous golden parachutes and Bain got outrageous fees. The losers?  The stockholders, who were told by the lying execs that they're 'restructuring'; the employees, many of whom were just tossed out; the taxpayers, because they raided pension funds for cash and stuck the government with the guarantees; and the customers, because Bain never once cared what any company they helped did for customers. At the time my company was 'restructured' and set up for sale, I got a new boss, a Bain consultant 'planted' as a VP to 'help' and he got rid of anyone who questioned things and he got a golden parachute too. Romney's people at the time were so crude about short-term fees that we used to joke about how surprising it was that he was a Mormon but acted like he'd sell his kids if he had the chance. And to lead the USA?  Simple:  as others have said here, saddle the lower class with the cost of government, remove all regulations on the rich, and have a clear 1% – 99% plutocracy. And hire the very very best PR people in the world to continue demonizing anyone who questions the rip-off."

But another commenter defended Romney.

Abbie Mathis Gregory: "Romney worked and earned his wealth he wasn't raised with wealth! Romney is successful because he worked very hard and earned his success, and is absolutely a great businessman. To think he doesn't understand those who are poor or have different lives from his, is just nonsense. He obviously cares about a very real concern, which is getting the average worker back on their feet and out of this terrible economy! (Something that within 3 yrs. Obama vowed he would do, and cannot do!) Mitt would be a great candidate because he is hardworking, confident, and has proven he can get the right results! Also, I agree with anything that will work America towards a healthy economy once again!"

One reader even suggested that Romney should be like Ike.

LadyOfRage: Romney needs to run as an Eisenhower Republican. Ike was one of the greatest and most underrated presidents in history because he wasn't a slave to his party. In fact he was more Independent than Republican or Democrat. He took the best ideas from both sides and made the smartest choices. And he rejected, wholesale, the terrible ideas.  Ike had such a successful presidency that every president should model their presidency after him."