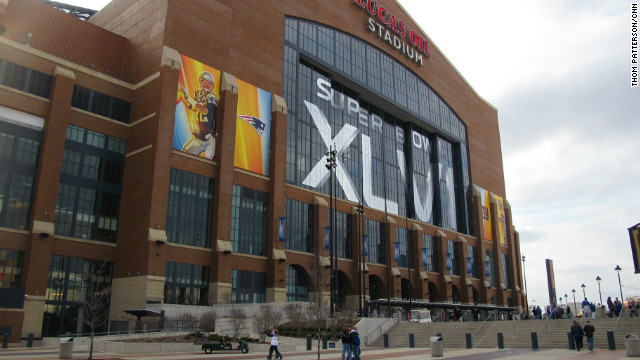 Overheard on CNN.com: What's a 'Hoosier'? In defense of Indy's Super Bowl

Our readers are apparently quite excited about the Super Bowl and its host city Indianapolis, Indiana. We received several passionate comments from residents and fans. There was also plenty of talk about the game itself. Let's delve in.

jasges: "I have been to several Super Bowls and this is probably one of the best setups so far. A lot to do here. We are pleasantly surprised!"

Guest: "I have visited Indianapolis several times for Men's NCAA Regionals/Sectionals. It is a very nice city. I would visit there again without hesitation."

Yes, there were a few skeptics.

wilecoyote58: "Indianapolis is a pleasant, if dowdy city. Some nice restaurants and it is compact. BUT – who the hell wants to spend a week in Indiana in February? There is a good reason the student body of every midwestern university heads to warmer climes at Spring Break. But then it is clear that those who attend the Super Bowl are not the brightest and deepest thinkers in our society. It is a football game folks, not the Second Coming."

Some of our readers' posts were directly addressed to the story writer, Thom Patterson, who is from Indiana. Two are included here. (By the way, the author of this blog post is a former resident of Des Moines, Iowa, and can attest to the high quality of the city's botanical dome. Wichita, Kansas, is also quite lovely.)

Bill Hicks: "It's kind of funny seeing the New York media talk about Indianapolis as if it's Des Moines or Wichita. It's the second-largest city in the Midwest (after Chicago) and 12th largest in the country."

LoveIndy: "What makes this article worse is that the author is from Indiana. He discounts us as if we are some cult city that knows nothing about the sports industry i.e.: Men's & Women's Final Four at least every five years, Indy 500, Brickyard 400, NCAA Headquarters, Indiana Pacers oh yes let me not forget to mention THE INDIANAPOLIS COLTS WHO HAVE WON AN SUPER BOWL CHAMPIONSHIP. Really Thom Patterson? THERE IS MORE THAN CORN IN INDIANA!"

We asked Patterson to respond to these comments. Here's what he said:

Patterson: "Hi Bill, thanks for reading the story! CNN.com isn’t based in New York. We’re based in Atlanta, but we certainly would have written the story the same way if were based in the Big Apple. I can tell you from my own experience that Indianapolis is a top-notch city, as I’m sure Wichita and Des Moines are. The mission of our story was to profile a city that has never hosted a Super Bowl before – especially a city that doesn’t seem to get as much national attention as it may deserve – like Indianapolis. You mentioned that Chicago is the largest city in the Midwest, which reminds me that Chicago is another cold-weather city that has never hosted a Super Bowl. If and when Chicago does host a Super Bowl, I bet bloggers and news websites would write about how Chicago is hosting its first Super Bowl and what that means for the city."

Patterson: "Hi LoveIndy, I certainly don’t mean to discount my own hometown. It was a great place to grow up! I don’t think I implied at all that the city knows nothing about the sports industry. I wouldn’t write that. In fact, I believe quite the opposite is true. Indianapolis is a huge sports town. I’ve been an Indiana Pacers fan since the American Basketball Association days. I loved listening on my transistor radio to Joe McConnell calling the games. Actually, I attended a lot of Pacer games at the old Market Square Arena, which you may recall was where Elvis Presley gave his final live performance. Also, I believe I mentioned in the story that Indianapolis has hosted NCAA basketball Final Four tournaments and the Indy 500 ... etc."

Patterson also said, "At a time when Indiana’s economic reliance on the auto industry has been so troubled, the state’s cornfields have been a Godsend as a much-needed revenue stream."

There was another discussion that took place about the word Hoosier.

Chris Schonegg: "Dude ... NO ONE knows the actual origin of the word. We learned there were several competing theories in Indiana History class."

We found an interesting history of the word Hoosier on an Indiana University web page. We once again asked Patterson for his thoughts, and he thanked the commenter for their interest and had some funny thoughts (all tongue-in-cheek, folks) excerpted here. He also said "Go INDY!" just so you know.

Patterson: "Hi Guest, it really *is* shameful and sad that no one really knows the origin of the word Hoosier. I remember at Indianapolis Public School #53, our teachers told us that there were a few theories about how the word came to be. My personal favorite take on the origins of the word 'Hoosier' is the theory about fighting frontiersmen and an ear being bitten off. And the question: 'Whose ear is this?' If you say 'whose ear' 10 times real fast, you will get the word Hoosier. Also, people will laugh at you. So I recommend performing this experiment in the privacy of your own home. Former world heavyweight champion boxer Mike Tyson was likely not involved in the ear biting incident."

For those visiting Indianapolis, there are plenty of places to eat.

Our Eatocracy readers suggested looking for those hidden places to grab grub. One reader gave a particularly comprehensive list worth sharing.

Andrew: "St. Elmos is overrated and overpriced. Yats, MacNivens, Bazbeaux, Bourbon St. Distillery, Shapiros, Mama Carollas, are all unique to Indianapolis and have great food to match the prices (Yats and the Distillery are SO CHEAP!!!). You really can't go wrong with them. Bars? The Chatterbox, MacNivens, Whistle Stop, The Distillery, Slippery Noodle are all great places to check out that aren't too commercial. The Claddagh is always a great time. For cougar hunting, hit up Ike and Jonesys. Nicky Blaine's is cool, but be prepared to spend a lot of money there. Broad Ripple bars: Avoid Brothers. Chumley's and the Wellington are great. If you don't mind carrying cash, definitely go to the Alley Cat, perennially voted one of the best dive bars in the country. Closes at 3 a.m., opens at 6 a.m."

crazyvermont: "You pretty much should have written this column, as you definitely have a handle on the Indy restaurants. In agreement 100%."

There were a few other suggestions on the page, also worth checking out. Finally, in this commenting celebration of the Super Bowl, we take a look at the game itself.

Super Bowl could hinge on one ankle

This story is about the Patriots' superstar tight end Rob Gronkowski, noting that he is expected to be a key player if his ankle holds. Patriots fans seemed convinced everything will be OK.

Weso365: "Gronkowski will be ready Sunday. There will be no stopping the New England Patriots!"

Tr1Xen: "Two words: WES WELKER. Pats have still got it."

djfl00d: "Don't forget about Welker, Branch, Hernandez, Edelman, even Ocho can be a factor in this game. (Tom) Brady's got lots and lots of options. (New England) sports do not ever hinge on one player. Even the year Brady was out, the Pats still did very well."

legion126: "I think it is funny how Justin Tuck's strategy to win the game is to try and hurt Brady and hope Gronk won't play. Why don't you be a man and hope to play a game against the Patriots, instead of hoping for injuries and looking to who might have a weakness form a previous injury that you can exploit? ... "

For all you Giants fans:

iBod: "Pass, pass, pass ... It's part of the game, but it's getting old watching highlights of it being all the New England Patriots do. In fact, they are so accustomed to it being their lifestyle, that is why they haven't won a Super Bowl since 2004. The philosophy is simple: Stop Tom Brady, and you win the game. With a defense as great as the New York Giants', it is so hard to believe New England can win against them - especially when it's 'been there, done that, doing it again.' I'm sorry to upset you Upper Northeasterners, but the old rivalry will be won by New York ... again."

BobMc: "Lets see, the Pats' offense is 31st and the Giants are 27th, based on best defense ... the ball goes to New York ... If you look at the last eight games, Giants' offense ranks better. Loss loose goose, bye bye Brady, your Bunch is a gonna be a Lunch."

For all you Madonna fans (not):

BobMc: "If ... Brady is pressured in the Pocket ... and the Giants control the ball the percentage of the game ... that would give an edge to the Giants, especially if Eli (Manning) plays at the level he has played these last few games. Two great quarterbacks' receivers. Time to rock on, but then there's the Madonna thing (poor choice). What the Super Bowl needs is Rob Zombie music."

What do you think about the game? About Indiana? What about the Super Bowl commercials? Let us know who you're rooting for in the comments area below and in the latest stories on CNN.com. Or sound off on video via CNN iReport.