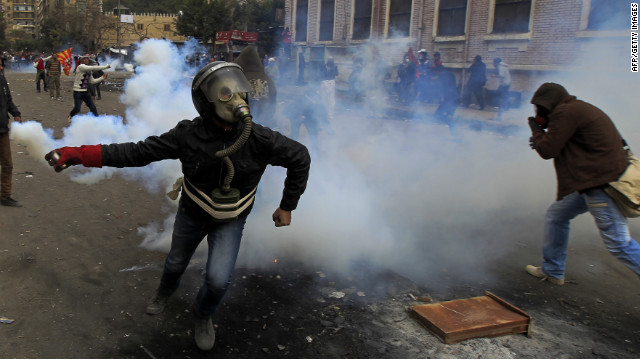 A masked Egyptian protester prepares to throw back a tear gas canister fired by security forces during clashes in Cairo.
February 3rd, 2012
08:31 AM ET

Violent clashes reignited in Cairo on Friday between Egyptian police and protesters angered by reports of inadequate security at a soccer match that devolved into a riot this week, leaving 79 people dead.

Thousands of protesters gathered outside the Interior Ministry, prompting riot police to deploy tear gas for fear the men - some of them masked - would storm the building.

"The people demand the downfall of the field marshal," chanted the protesters, who waved flags from the popular soccer team Al-Ahly, which was playing in the game Wednesday when the riot broke out.

Gen. Marwan Mustapha, a spokesman for the Interior Ministry, said protesters who had taken over a government taxation building were throwing Molotov cocktails from the roof. More than 100 security forces were injured, including several by birdshot pellets, Mustapha said.

Ifeoma Ozomaās path as an advocate for tech workers started with a series of tweets one morning in June 2020cnn.it/3urqEq24e
cnni

7:45 am ET December 6, 2022 RETWEET
"The new rules mean that in two years, a whole range of electronic devices ā from phones to tablets and headphonestwitter.com/i/web/status/1ā¦yoQH
cnni

6:45 am ET December 6, 2022 RETWEET
Global pop sensation Blackpink have been chosen as Time magazineās 2022 Entertainer of the Yeacnn.it/3iAM5Cx3s
cnni

6:22 am ET December 6, 2022 RETWEET
Al Jazeera said it will submit a case to the International Criminal Court over the killing of journalist Shireen Abātwitter.com/i/web/status/1ā¦P4
cnni

6:15 am ET December 6, 2022 RETWEET
Described as a "sunny place for shady people," by English novelist W. Somerset Maugham, Monaco is one of the smalleātwitter.com/i/web/status/1ā¦0G
cnni