The dueling rallies were held about six weeks after the last major anti-government demonstrations.

Putin is seeking the presidency in the March elections and will represent his United Russia party.

The move is the latest step toward Putin's reclaiming the presidency after switching to the prime minister's office because of a law barring him from serving more than two consecutive terms as president.

Joining tens of thousands of marchers, Prokhorov told CNN Saturday the protesters "are my potential voters. And I will do my best to help them to live in an open, competitive Russia."

A community meeting Saturday at a school where over a dozen children have developed tic-like symptoms quickly became contentious, further dividing an already-polarized community.

The meeting came after calls for more thorough environmental testing.

Doctors have diagnosed most of the children and one adult suffering from the symptoms with "conversion disorder," a condition induced by stress. When occurring in clusters the condition is sometimes called "mass hysteria."

But some environmental activists have suggested that some sort of toxin may be causing the condition in the western New York state community.

In a six-hour presentation Friday, the leader of the Cuban Revolution and former president was jovial as he spoke about the 1,000-page work, the Granma newspaper reported.

Castro, 85, spoke together with a panel of cultural and literary officials at the unveiling of the books.

"They are going to talk to you about two books that you had no idea about," Castro said, according to Granma.

The two volumes, titled "Fidel Castro Ruz: Guerrilla of Time," is based on conversations with the writer and journalist Katiuska Blanco. 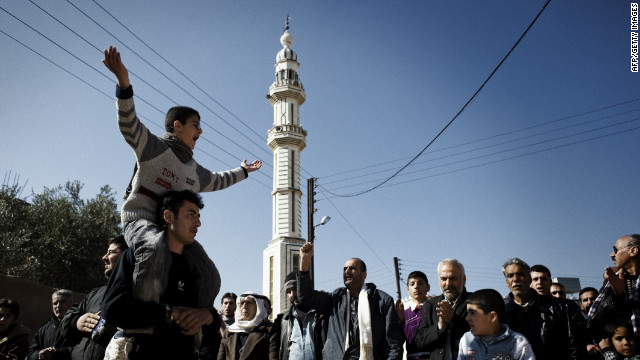 A U.N. Security Council resolution condemning Syria was not adopted Saturday after Russia and China voted against it.

Russia, a veto-wielding permanent member of the Security Council and a trade partner with Syria, has hinted it is not satisfied with the latest draft resolution and was seeking to introduce late amendments to the text.

Thirteen Security Council members, including permanent members France, United Kingdom, and the United States, voted in favor of the resolution.

Some Syrians have cried out for international action to stop attacks on civilians.

"Every government has the responsibility to protect its citizens, and any government that brutalizes and massacres its people does not deserve to govern," Obama said."Assad must halt his campaign of killing and crimes against his own people now. He must step aside and allow a democratic transition to proceed immediately."

Syrian anti-regime protesters shout slogans during a demonstration in Al-Qsair, near the flashpoint city Homs, on Friday.
February 4th, 2012
10:46 AM ET

U.S. President Barack Obama on Saturday released a strongly worded condemnation of the government crackdown in Syria, calling on the U.N. Security Council to "stand against" the "relentless brutality" of the regime.

Following is the text of the statement released by the White House.

Thirty years after his father massacred tens of thousands of innocent Syrian men, women, and children in Hama, Bashar al-Assad has demonstrated a similar disdain for human life and dignity.Â  Yesterday the Syrian government murdered hundreds of Syrian citizens, including women and children, in Homs through shelling and other indiscriminate violence, and Syrian forces continue to prevent hundreds of injured civilians from seeking medical help.Â  These brutal killings take place at a time when so many Syrians are also marking a deeply meaningful day for their faith.Â  I strongly condemn the Syrian government's unspeakable assault against the people of Homs and I offer my deepest sympathy to those who have lost loved ones.Â  Assad must halt his campaign of killing and crimes against his own people now.Â  He must step aside and allow a democratic transition to proceed immediately.

The Syrian people demonstrated in large numbers across Syria yesterday to participate in peaceful protests commemorating the 30th anniversary of the Hama massacre.Â  They labeled the protests, "We are Sorry, Hama - Forgive Us."Â  We owe it to the victims of Hama and Homs to learn one lesson: that cruelty must be confronted for the sake of justice and human dignity.Â  Every government has the responsibility to protect its citizens, and any government that brutalizes and massacres its people does not deserve to govern.Â  The Syrian regime's policy of maintaining power by terrorizing its people only indicates its inherent weakness and inevitable collapse.Â  Assad has no right to lead Syria, and has lost all legitimacy with his people and the international community.
The international community must work to protect the Syrian people from this abhorrent brutality.Â  Earlier this week, our Arab partners called on UN Security Council members to take action to support a political solution to the crisis in Syria and stop Assad's "killing machine."Â  The Council now has an opportunity to stand against the Assad regime's relentless brutality and to demonstrate that it is a credible advocate for the universal rights that are written into the UN Charter.

We must work with the Syrian people toward building a brighter future for Syria.Â  A Syria without Assad could be a Syria in which all Syrians are subject to the rule of law and where minorities are able to exercise their legitimate rights and uphold their identities and traditions while acting as fully enfranchised citizens in a unified republic.Â  The United States and our international partners support the Syrian people in achieving their aspirations and will continue to assist the Syrian people toward that goal.Â  We will help because we stand for principles that include universal rights for all people and just political and economic reform.Â  The suffering citizens of Syria must know: we are with you, and the Assad regime must come to an end.

U.N. Security Council could vote Saturday on response to Syria

Almost eleven months after protesters first flooded Syrian streets to demand regime change and true democratic freedoms, the U.N. Security Council could vote Saturday on a draft resolution that would pressure the government to stop a sustained, bloody crackdown on dissidents.

But in the hours leading up to Saturday morning's meeting in New York, reports of carnage at the hands of the Syrian regime continued unabated.

The Syrian Observatory for Human Rights, an opposition activist group, said early Saturday that 217 people, including women and children, had been killed in the beleaguered city of Homs over the past day.

(CNN) - The man that prosecutors say is behind the stabbing deaths of four homeless men in Southern California now stands accused of the brutal killing of a mother and brother of an old friend, authorities said.

The latest allegations against Itzcoatl Ocampo, 23, were made public Friday, shortly after authorities dropped charges against the friend, Eder Herrera, in the killings.

"This case has expanded from murdering random, vulnerable strangers to murdering people he knew," he said.

Buzzy beauty startup Glossier has laid off a third of its corporate staff, founder and CEO Emily Weiss said in an eâ€twitter.com/i/web/status/1â€¦Y9
cnni

5:13 pm ET January 28, 2022 RETWEET
Would you know what to do if you were stuck outdoors or in a car during a blizzard? Here's how to first avoid theseâ€twitter.com/i/web/status/1â€¦jg
CNNweather

4:34 pm ET January 28, 2022 RETWEET
Joe Exotic, of Netflix's "Tiger King" fame, aka Joseph Maldonado-Passage, has had his sentence in the murder-for-hiâ€twitter.com/i/web/status/1â€¦IQ
cnni