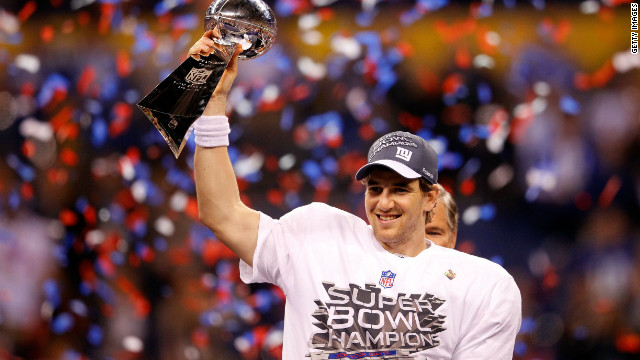 Or, well, maybe it was Madonna.  We knew there'd be jokes about her age, there were the required "I hope she doesn't break a hip" tweets before she went on. And there were some flimsy parts were Madge looked as though she might have to eke out the rest of her performance.

And it made America's day thanks to Clint Eastwood, who, after the big, splashy halftime performance quieted living rooms across the country as he declared it was also halftime in America.
And dammit, it was time for America's second half, he declared with a patriotic spirit that almost rivaled the big game itself.

And then there was the final drive for Big Blue. As the jokes began flying that Giants were applying the "David Tyree" Velcro to their helmets, an ode to the unbelievable catch in the past match-up, Eli Manning connected with Mario Manningham for another brilliant last-drive play. Manningham seemingly pulled in a ball thrown high to the sideline and was able to keep both feet in bounds as he was pummeled by two Patriots players. The play sent people into a frenzy. Could the Giants actually pull off another win over the Patriots?

With the Hail Mary a failure, the Giants claimed victory with a score of 21-17 . Manning gets the role of hero, and Brady, well, let's just say that despite his record completions in a row, and a stellar game, losing is losing. And the Boston Globe skewered him for it.

"The legend is dead, the prince has turned back into a frog, and ... well, use whatever other cliché you want.

A performance as bad as Tom Brady's tonight in Super Bowl XLVI deserves a lead just as lame. Sorry, Tommy Boy, this one's on you. Your hideous performance led to the Giants' 21-17 Super Bowl title win. How embarrassing for your coach, your teammates, and your fans."

Apparently, that sentiment was something that Brady's wife, supermodel Gisele Bundchen, expected. But she seemingly wanted to make clear that even though New England ended with a loss, it wasn't because of her husband's lack of trying.

A video by TheInsider.com, posted on Boston.com, shows her making her voice heard to Giants fans that maybe were giving her a bit of a hard time.