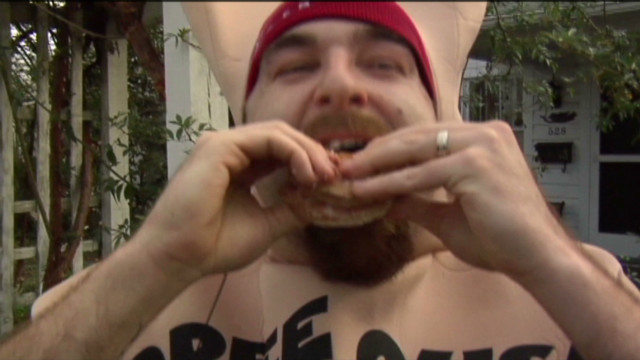 To many of us, completing a running race is tough enough. But for others, just running the race isn't enough. Sometimes you've got to add something fun into the mix.  In today's Gotta Watch, we look at three races that won't be featured in this summer's London Olympics.

Five miles, 12 donuts – We did the math on this charity event involving Krispy Kreme donuts and a five-mile run. Participants run 2.5 miles, then have to eat a dozen donuts before resuming their run.  Think you could complete this race?
[cnn-video url=http://www.cnn.com/video/#/video/us/2012/02/06/krispy-kreme-challenge.wncn]

'Drinkers with a running problem'- "Hashers" are runners who incorporate drinking alcohol with running. In this video, runners take part in a full, 26.2-mile marathon, but are required to drink a beer after each mile.  As if this weren't serious enough, not only are their runs timed, but they're even clocked while consuming their beers.
[cnn-video url="http://www.cnn.com/video/#/video/living/2012/02/06/2008-az-marathon-beer.kmsb"%5D

Winning wiener dogs – Our four-legged friends can't be left off our list of wacky racers. In this little race, Dachshunds are dressed up in hot dog costumes and race across a finish line. Unfortunately for their owners, some dogs like their costumes more than running in a straight line. Check out these wiener dogs as they go for the win.
[cnn-video url="http://www.cnn.com/video/#/video/us/2011/09/16/natvo-weiner-dog-race.wlwt"%5D