A white supremacist was killed in a shootout with California deputies, according to the San Luis Obispo Sheriff's OŌĆtwitter.com/i/web/status/1ŌĆ”Zs

A federal judge orders the acting director of the Bureau of Land Management to step aside, finding that he has servŌĆtwitter.com/i/web/status/1ŌĆ”JO

While bars in New Orleans remain closed because of coronavirus restrictions, the city will now allow restaurants toŌĆtwitter.com/i/web/status/1ŌĆ”sE

A powerful Vatican cardinal has resigned after he says he was accused of embezzlement cnn.it/334PsqY 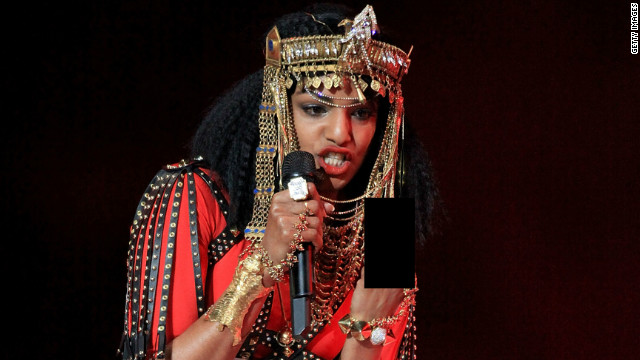 Ahead of her Super Bowl halftime show, singer Madonna promised there would be no "wardrobe malfunction." What she didn't guarantee was no obscene gestures.

Rapper M.I.A. provided a middle finger salute to network cameras Sunday night during the 12-minute extravaganza, when she joined Madonna during a performance of the latter's new single, "Give Me All Your Luvin.'"

The apologies from the NFL and NBC came quickly - they blamed each other.

"There was a failure in NBC's delay system," said Brian McCarty, the league's vice president of communications. "The obscene gesture in the performance was completely inappropriate, very disappointing, and we apologize to our fans."

"The NFL hired the talent and produced the halftime show," NBC said. "Our system was late to obscure the inappropriate gesture and we apologize to our viewers."

The episode was reminiscent of the 2004 Super Bowl when singer Janet Jackson's nipple was briefly exposed during a performance with singer Justin Timberlake.

The infamous "wardrobe malfunction" episode, as it came to be known, prompted the Federal Communications Commission to fine broadcaster CBS $550,000. In November, a divided 3rd Circuit Court of Appeals ruled the FCC improperly punished the network.

Since then, the NFL has maintained tight control over the show's production.

Fast forward to Sunday and what the NBC dubbed M.I.A's "spontaneous gesture."

As in 2004, the episode occurred when the New England Patriots were playing in the big game.

10:02 pm ET September 25, 2020 RETWEET
One of the Vatican's powerful cardinals has resigned from his post amid a growing financial scandal. Giovanni AngeŌĆtwitter.com/i/web/status/1ŌĆ”wQ
cnni

9:08 pm ET September 25, 2020 RETWEET
"Strongmen succeed when they are able to convince people that the truth is unknowable ŌĆö especially election resultstwitter.com/i/web/status/1ŌĆ”U8oy
cnni

6:58 pm ET September 25, 2020 RETWEET
Google will temporarily prohibit all advertisers from running ads on its platforms that relate to the US election fŌĆtwitter.com/i/web/status/1ŌĆ”0U
cnni