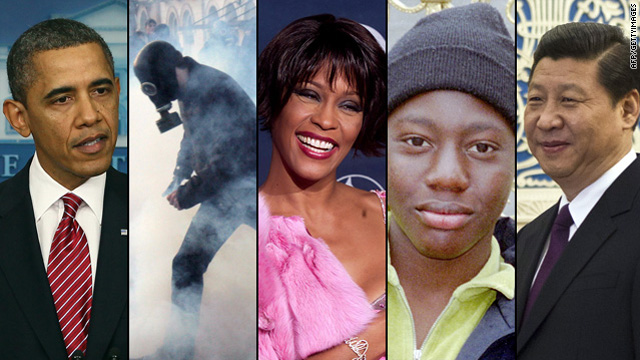 The White House is expected to release its proposed budget for 2013 on Monday. President Barack Obama's budget proposal will forecast a $901 billion deficit in 2013 and includes plans to make targeted investments in areas such as infrastructure while increasing taxes on the wealthy.

The White House bills the document as a "blueprint for how we can rebuild an economy where hard work pays off and responsibility is rewarded."

Tied to the budget is Obama's ongoing clash with the Republican-led Congress over extension of the Bush-era payroll tax cut. The president wants to keep the tax cut alive with no strings attached, but House Republicans, particularly Budget Committee Chairman Rep. Paul Ryan, R-Wisconsin, are seeking further spending cuts in exchange.

"I do believe this will get extended, but when we make offer after offer based on policies that we know Democrats and the president have supported in the past, yet they still insist on not coming to agreement, it's difficult to see exactly how this is going to pan out," Ryan said on the ABC program "This Week With George Stephanopoulos."

Tension in Greece over austerity measures

Greece's government is slated to make a set of crucial decisions as it straddles a line between financial ruin and further antagonizing citizens who are furious with the spending cuts meant to fix the situation.

Greece's parliament on Sunday approved another round of austerity measures that euro zone finance ministers demanded as a condition for additional bailout funds. Next, according to the euro finance ministers, Greece's political leaders must pledge that they will continue to implement the measures after upcoming elections and find a further 325 million euros (about $429 million in U.S. currency) in "structural expenditure" cuts for 2012.

If all those things happen, the euro ministers could sign off on a second bailout worth 130 billion euros on Wednesday for the debt-stricken nation. But if they do, expect more demonstrations in Greece, where riot police Saturday were using tear gas and stun guns on protesters who already were rallying against the new austerity plans for cuts in government spending, wages and pensions.

The bailout deal is intended to help reduce Greece's debts to 120% of gross domestic product by 2020, from about 160% currently.

The nation has struggled to follow through on austerity measures and economic reforms that were a condition of its 2010 bailout package. At the same time, the Greek economy has been in recession for years and many analysts warn that additional austerity could make the situation worse, CNNMoney reports.

What led to Whitney Houston's death?

Fans of Whitney Houston are paying tribute to the renowned pop singer as details of her death in California Saturday - hours before she was to attend a pre-Grammy party - trickle in.

Houston, whose soaring voice and enormous talent were overshadowed in recent years by her battles with drug addiction, was found dead Saturday in a Beverly Hills, California, hotel. Questions persist about the circumstances surrounding her death.

She was found in the bathtub of the room, hotel employees and people close to Houston told entertainment news website TMZ. CNN could not immediately confirm the TMZ reports Sunday. There were "no obvious signs of criminal intent," Beverly Hills Police Lt. Mark Rosen said. Police were tight-lipped about the investigation Sunday, saying no updates would be forthcoming until Monday.

Houston was in the midst of a comeback, with a few shows scheduled and a movie in the works.

Photos: Whitney Houston through the years

iReport.com: Your memories of Whitney Houston

The Arab League reportedly is proposing that it send a new observer team - this time military experts from the league and the United Nations - to Syria as part of efforts to halt months of violence in that country, including a recent days-long push by the government to crush opposition in the city of Homs.

The Arab League also would impose unprecedented sanctions on Syria, according to a foreign minister of one of the Arab states taking part in league discussions.

The discussions come weeks after the Arab League pulled its last observation mission because of increasing violence, and eight days after Russia and China vetoed a U.N. Security Council resolution aimed at halting the violence, drawing anger from many world leaders.

Also this week, U.N. diplomats are mulling another draft resolution - this one brought by Saudi Arabia - and are expected to convene Monday. The Saudi draft resolution will be submitted to the U.N. General Assembly, where vetoes are not allowed but resolutions are not legally binding.

U.N. officials estimate 6,000 people have died since protests seeking Syrian President Bashar al-Assad's ouster began nearly a year ago. An opposition activist group says at least 687 people, including 59 children, died in the past week. Activists say government forces are cracking down on protesters and people opposed to the regime; al-Assad's government has insisted its crackdown is aimed at armed gangs and foreign terrorists bent on destabilizing the regime.

The man expected to become China's next president and U.S. officials get to size each other up when he visits Washington and other U.S. cities this week.

Xi is due to arrive in Washington on Monday before meeting President Barack Obama on Tuesday at the White House. Xi is then expected to go to Muscatine, Iowa - which he visited in 1985 as a farm official on an international mission - on Wednesday before talking U.S.-China trade in Los Angeles at the end of the week.

Underwear bomb suspect to be sentenced

A Nigerian man who pleaded guilty to trying to bring down a Christmas Day 2009 flight with an explosive device hidden in his underwear could get a life prison sentence on Thursday.

Umar Farouk AbdulMutallab pleaded guilty in October to attempted use of a weapon of mass destruction, among other charges. He's scheduled to be sentenced in a federal courtroom in Detroit on Thursday; prosecutors are urging the maximum sentence, life in prison.

U.S. officials say the terror group al Qaeda in the Arabian Peninsula helped foment the bombing attempt on Northwest Airlines Flight 253, which was heading from the Netherlands to Detroit. Authorities say AbdulMutallab, a passenger, tried to ignite an explosive device that was hidden in his underwear shortly before the plane landed, but passengers and flight crew members subdued him and extinguished flames after the device briefly set him on fire.

When pleading guilty in October, AbdulMutallab told the court that he aimed to avenge "the killing of innocent Muslims" and "U.S. tyranny and oppression of Muslims."

A monument listing 102,163 Dutch victims of the Holocaust was unveiled by King Willem-Alexander in Amsterdam on Sunâ€twitter.com/i/web/status/1â€¦9y
cnni