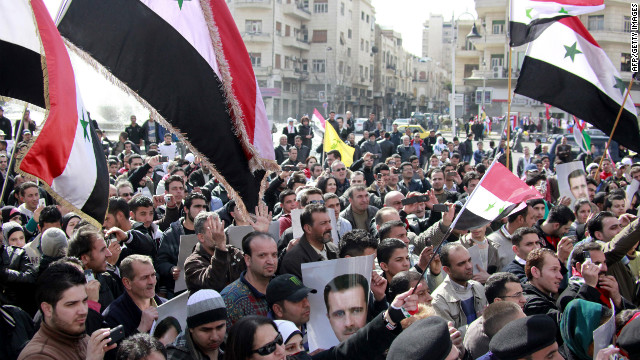 Given the ongoing unrest in Syria, readers are debating whether the U.S. and U.N. should get involved.
February 13th, 2012
07:43 PM ET

Overheard on CNN.com: Readers ponder dangers, benefits of getting involved in Syria

The violent unrest in Syria has many people wondering what solutions might exist. Among our readers, a debate is brewing about whether it's a good idea to get involved in the country's affairs, and if so, how.

This story talks about the United Nations' involvement in particular. The most-liked comment was about the Arab League's responsibilities.

blursd: "What's the point of an Arab League even existing if the only time it uses its collective militaries is when it a question of Jewish interests. Seriously, if they think this is as imperative of an issue as they say it is (a member state unjustifiably killing fellow Arabs), then they should be willing to commit their militaries to resolving the issue. Instead, they just sit around and twiddle their thumbs like a bunch of ineffectual hypocrites, and expect the 'evil' West to come in and do the 'dirty work.' I say let the Arab League step up to the plate ... if they want to world to treat them like a legitimate organization, they need to start acting like one."

JohnRJohnson: "Unfortunately, the Mideast is more than just nation states. It is an uneven grouping of several branches of Islam. Shiites in one country would not like seeing Shiites in another country fired on by an Arab League force. The same goes for Sunnis. These people are bound together more by religion and tradition than by a sense of nationalism. So the Arab League has to tread very carefully here, and that's the primary reason why it is calling on the U.N. to take action."

Is it right for outsiders to get involved?

We saw a lot of readers saying people should stay out of Syria's business, but others were frightened of that idea as well.

Sargemdf: "Let the people of Syria take care of themselves. I'm tired of us sending our troops into Arab countries to fight and die for them. They don't like us, and they always turn on us, so I say let them fend for themselves. They are a people incapable of living in peace with anyone, even themselves. No matter what we do, that region and those people will never live in peace. It is not worth one Western life to go in there."

truebob: "Kind of infantile to think that you should not participate in managing a rabid dog on the loose. The U.S. tried that in the 1930s and early 1940s. If we are not careful, the dog will infect others and then it is a rabid pack and a threat to us all. An ounce of prevention is worth a pound of cure. I would think Pearl Harbor was a clear enough indication that isolationism won't keep us safe, but maybe everybody didn't pay attention in school."

Is this a case for the United Nations?

iceroads: "Here's an idea. How about both the U.N. and the U.S. butt out of Syria's business. This is an in-house matter in Syria. It's no one else's fight."

Karim Al-Sharif: "This is what the U.N. is for. Solving problems that can't be solved by anyone else. Who is the Syrian government accountable to? No one."

Edward Hassertt: "I agree, the U.N. was created to resolve problems between nations, not take sides in a civil war where both sides have behaved atrociously."

Others were a little less than confident in the U.N.'s power.

Spearwielder: "The U.N. will issue a three-page resolution stating 'Don't do that, Syria, or we will release a resolution saying 'don't do that' a second time.' "

What's your take on this issue? Share your opinion in the comments area below and in the latest stories on CNN.com. Or sound off on video via CNN iReport.