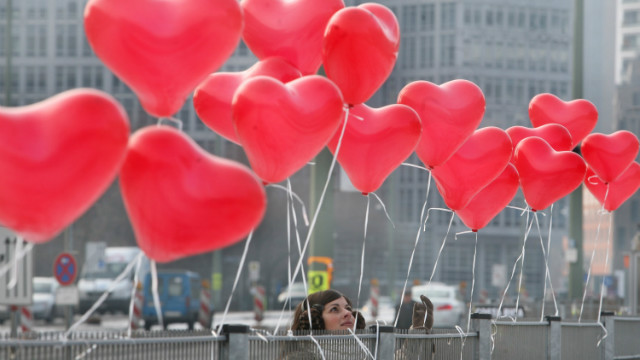 Germany is for lovers: A woman strings balloon hearts to a fence Tuesday in Berlin.
February 14th, 2012
12:12 PM ET

Valentine's, a day for lovers and haters

At least one CNN.com reader thinks we're grouping Valentine's Day with that other special day the Mayan calendar predicts is coming this year - the end of the world.

The reader was responding to a report from CNN's Thom Patterson, who looked into how Valentine's Day, and our idea of romance, has changed with the advent of texting, reality shows and social media. Emory University English professor Mark Bauerlein wonders whether Facebook has killed the love letter.

"Romance is alive and well, I see it all the time and deliver on it all the time. To suggest that there is anything wrong with 21st-century love isÂ ridiculous and somewhat arrogant of the experts to tell people how to conduct a romance, something that is very personal, private and unique.

Now, I'm no expert on doomsday. I'm just a humble, middle-aged, married-with-children blogger, and you can see what category of Valentine's observers I fit into, according to CNN's Emanuella Grinberg. (BTW, Honey, I hoped you liked the heart-shaped cheesecake. I think the kids put it in the fridge, near the back, on top of the milk and the sweet tea, so be careful when you take those out or the cake might fall into the leftover curry, which was delicious. Now that's middle-aged romance, people!)

Sorry, back to Valentine's Day and doomsday. If we could choose folks who might have some insight on this combo, Stalin and Mussolini might be good folks to turn to. And as CNN has been unable to reach them for comment this Valentine's Day, we tasked our Ashley Fantz to comb through their love letters to really see what was in their hearts.

Stalin may have missed the big picture, I'd say, writing to his wife, "I miss you so much Tatochka. ... I'm as lonely as a horned owl." Of course, at the time, he was exiling millions to grisly fates so it would've helped if he spread the love around a little, maybe going for the wise owl instead of the horned one.

"I love you too, my dear Ida, even though I haven't been able to prove it to you," he once wrote to Ida Dalser, rumored to be his first wife. Dalser and her son Benito Jr. were later institutionalized under Mussolini's order.

OK, so maybe Stalin and Mussolini had a better grip on cruelty than romance. But maybe they just didn't understand the science of the kiss.

But University of Texas researcher Sheril Kirshenbaum does. She's written a book on it and explains how it works and why you like it in this CNN.com column. Read up now. I don't want you making any mistakes Tuesday night. Knowledge is power.

Once you understand the science, you might need help visualizing how to make the science work. No worries, photographer Peter Turnley has that covered with pictures from Paris, the home of the French kiss. Check out 14 lip smackers from the French capital he's committed to film since 1975.

That is sweet, sweet stuff. As is chocolate, which always plays a big part in Valentine's Day. And if you want to change up your chocolate selections this year, Eatocracy has some ideas.

There are other Valentine's food ideas on Eatocracy, and you can check out the blog to see 'em all. But, to me, this one is just plain weird and won't be on the menu this or any other Valentine's Day. It's a glazed doughnut with an egg in the hole, some cheese, maple syrup. I gotta stop. Yuck.

While sweet food may be one traditional Valentine's gift, it's a gift that doesn't hang around too long. Smells, however, often do, especially if we go all romantic and call them fragrances. Check out some of the scents of the season from New York perfumer Christopher Brosius on the What's Next blog.

I'm sure with all this advice and insight you're now fired up for a romantic Valentine's evening. Unless you're comedian Dean Obeidallah. He hates Valentine's Day, and he's happy to tell you about it.

Detroit plastic surgeon Anthony Youn hates the day, too. Valentine's Day was sort of a doomsday when he was younger because dates were hard to come by, he says. But he's happily married now. And being a medical guy, he has some tips on how not to sink into despair if love isn't coming your way.

Celebrate being single by creating your own solo travel adventure

Oh, about that Mayan stuff and doomsday, don't get down thinking this Valentine's Day might be our last on the planet.

It ain't gonna happen, and that's coming from the website mayanpredictions.net, which offers 10 reasons why the world will not end when the Mayan calendar does on December 21.

XOXOXOXO (That's kisses and hugs for you texters.)

An experimental drug was found to show potential as an Alzheimer's treatment in new trial results, but the findingsâ€twitter.com/i/web/status/1â€¦QG
cnni

2:15 am ET November 30, 2022 RETWEET
Early research suggests a promising use of artificial intelligence to predict the 10-year risk of death from a hearâ€twitter.com/i/web/status/1â€¦O1
cnni

An experimental drug was found to show potential as an Alzheimer's treatment in new trial results, but the findingsâ€twitter.com/i/web/status/1â€¦QG
cnni

2:15 am ET November 30, 2022 RETWEET
Early research suggests a promising use of artificial intelligence to predict the 10-year risk of death from a hearâ€twitter.com/i/web/status/1â€¦O1
cnni