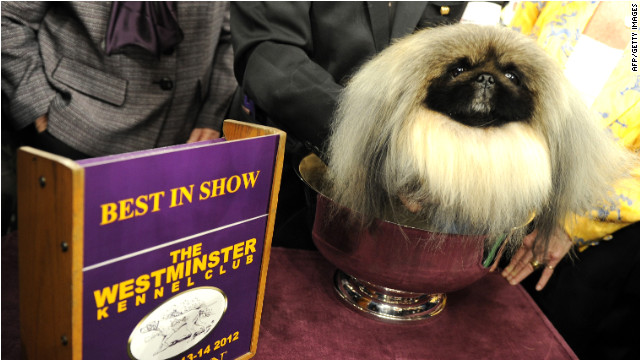 Pekingese, a runner-up from 2011, wins Westminster

The second time was the charm for Malachy the Pekingese at Westminster.

The squat and hairy 4-year-old from Pennsylvania became the fourth Pekingese - and only the 10th dog from the toy group - to win Best in Show in the 105-year history of the award.

“I’m still in shock,” Malachy’s handler and co-owner, David Fitzpatrick, told USA Network seconds after the prize was given. “It’s such a thrill, and I’m just so proud to have a dog that’s of this quality that could win a show like this and have an opportunity to exhibit him here. It’s the thrill of a lifetime.”

Malachy won the toy group - for the second straight year - a day earlier, and vied for Best in Show with the winners of six other groups. The last toy to win Best in Show was a papillon, in 1999.

Judges are instructed to evaluate dogs on how well they fit the written standards - the ideal appearance, movement, temperament and other traits - of their breed. Judge Cindy Vogels of Colorado made her decision after inspecting the seven group winners in front of a crowd that cheered its favorites.

Besides Malachy, the other group winners - and Best in Show finalists - were:

Terriers have won 45 of the 105 Westminster Best in Show titles. About 2,000 dogs, representing 185 breeds, were competing in this year's show.

Last year, a hound - Hickory the Scottish deerhound - became the first of her breed ever to capture Westminster’s Best in Show, and only the fifth dog from the hound category to win.