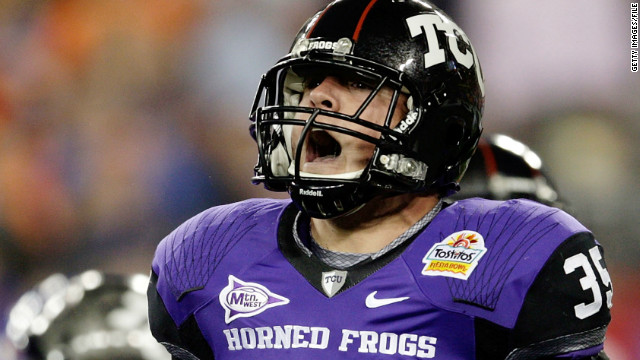 Editor's Note: An earlier version of this report included a photo that showed two football players. Player number 59 was not among those accused of drug dealing by police. We regret the error.

The football players include two defensive starters for last season's squad, which was No. 14 in the final Associated Press poll, plus a junior linebacker who sat out most of 2011 with an injury but was the team's leading tackler in 2010.

"There is no doubt that all of those arrested today are drug dealers," said McGee, who added that the selling happened on and off the Fort Worth campus. "These individuals engaged in hand-to-hand delivery for money with undercover agents."

School officials said TCU has banned the students from campus, class and school activities, pending the outcome of their cases. TCU Chancellor Victor Boschini said a vice chancellor will "determine what is going to happen to those students, following this."

"What they did, to be honest, is simply unacceptable. This behavior, when reported, is never tolerated at our university," Boschini said at a news conference with McGee and other officials.

An investigation by university and city police continues, and more arrests could come, Boschini said.

The 15 students were among 19 people for whom arrest warrants were issued as part of the probe, Fort Worth police and TCU said late Wednesday. Eighteen of the 19 were arrested Wednesday. Earlier, the school said 17 students were arrested, but "upon further examination of student records, it appears that 15 were students this semester and four were not," TCU spokeswoman Lisa Albert said.

Other arrestees face preliminary charges of felony or misdemeanor charges of delivery of marijuana or delivery of a controlled substance, according to Fort Worth police.

The students operated in several groups, and it's not clear whether those groups were connected, a Fort Worth police officer said at the news conference.

Albert said the students' ban from class and activities will remain until the cases are adjudicated. After the judicial process determines whether they are guilty, they "can face a disciplinary process on campus which could result in expulsion," Albert said.

Head coach Gary Patterson said he was shocked, hurt and then mad after he heard of the arrests Wednesday morning.

"Under my watch, drugs and drug use by TCU's student-athletes will not be tolerated by me or any member of my coaching staff. Period," Patterson said on the school's athletics website. "Our program is respected nationally for its strong ethics, and for that reason the players arrested today were separated from TCU by the university. I believe strongly that young people's lives are more important than wins or losses."

TCU Athletic Director Chris Del Conte said he "will not tolerate behavior that reflects poorly on TCU, the athletics department, our teams or other student-athletes within the department."

"We have an excellent athletics program at TCU, and an indicator of that excellence is the fact that we will not tolerate criminal conduct among our student-athletes," Del Conte said in his online statement.

The arrests come months before the football team, coming off an 11-2 season, prepares to start its first year in the Big 12 conference.

Brock, the linebacker, was an SI.com honorable-mention All-American after leading the Horned Frogs in tackles and fumble recoveries as a sophomore in 2010. But he was limited to one game as a junior, sitting out most of the season with an injured foot.

Johnson, the safety, started eight games in 2011, recording 47 tackles and 2.5 sacks. Yendrey, the defensive tackle, played in every game this past season and was an honorable-mention All-Mountain West Conference selection, recording three sacks and 39 tackles.