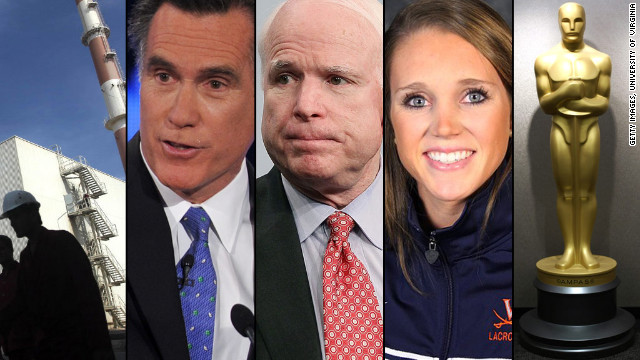 Officials with the International Atomic Energy Agency begin a second round of meetings Monday with Iranian officials about the country's nuclear program, which has prompted the West to impose new sanctions on the regime and Tehran to retaliate by cutting off crude exports to British and French companies.

Meanwhile, Israel has made clear that it is pondering an attack on Tehran's nuclear infrastructure, with the United States saying such an action would be "premature."

The United States and its allies claim Iran is developing a nuclear weapon, and their claims were bolstered in November by a scathing IAEA report that said Iran could be developing such weapons. Iran has insisted that its nuclear program is solely intended for civilian energy purposes. END_OF_DOCUMENT_TOKEN_TO_BE_REPLACED 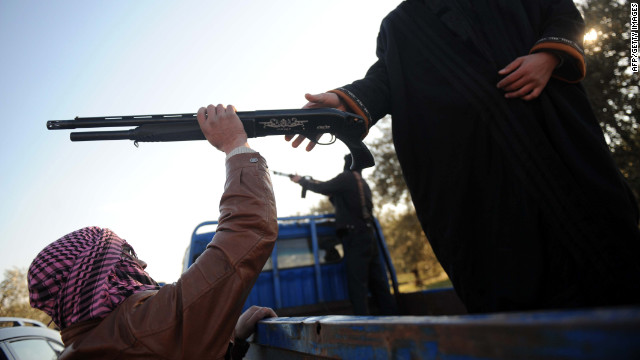 A member of the Free Syrian Army takes his weapon from a comrade during a patrol in Idlib in northwestern Syria on Saturday.
February 19th, 2012
05:40 PM ET

Inside Syria: Residents bracing for the worst in Homs

As conservatives in Washington urged President BarackÂ Obama to take action on Syria, CNN'sÂ Arwa Damon reported Friday that new violence was expected. And sure enough, the violence came.

CNN cannot confirm the authenticity of the footage Damon discusses, butÂ the clipÂ appears to show the vantage point of snipers. Reports say Syrian PresidentÂ Bashar al-Assad has been ordering attacks on citizens.

DamonÂ and CNN's Ivan Watson are reporting fromÂ SyriaÂ despite the country's attempt to block journalists.

Damon said residents are bracing for the worst in Homs, where the intensity of the attack by Syria's government is overwhelming. Women, children and men have been desperate to tell Damon their stories.

Activist Omar Shakir told CNN he is confident the Syrian army is preparing for a massive ground invasion of the besieged neighborhood of Baba Amr, the heart of the revolt.

"Just like every day, the residents of Baba Amr woke up (Sunday) to the sounds of violent bombing, as al-Assad forces continue to use different types of weapons, bombs and rockets in their attacks," he said.

Sunday, 10 people in Homs were among the at least 23 killed across Syria, according to the Local Coordination Committees of Syria, a network of opposition activists. In the 11 months of Syria's uprising, almost 9,000 people have been killed, the LCC estimates.

The attack, which occurred at the traditional start of the work week in the Arab world, wounded at least 21, two police officials said.

The officials spoke on condition of anonymity because they were not authorized to release details to the media.

Baghdad police academy is the only one in the capital and is within the compound of the heavily -guarded interior ministry, but has a separate entrance.

The attack comes as the country is mired in a political crisis split along sectarian lines, which has raised fears about a return to the levels of violence that nearly tore the country apart in 2005 and 2006.

Whitney Houston's journey "home" ends with a private burial in New Jersey on Sunday as questions persist about what caused the superstar's death.

Houston will be buried next to her father at Fairview Cemetery in Westfield, south of Newark.

Her burial brings an end to her "coming home," as her family has dubbed the invitation-only memorial service held a day earlier at her childhood church in Newark.

The family-only burial is in contrast to the emotionally-charged, star-studded memorial service held at New Hope Baptist Church, where Houston, nicknamed "Nippy," was soloing in the junior choir by age 11. 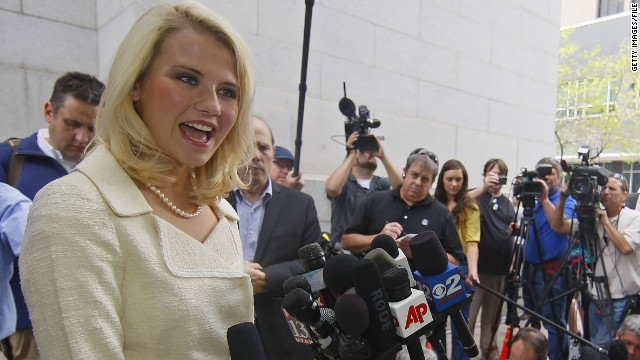 Elizabeth Smart, the Utah woman abducted as a teenager and held captive for months, tied the knot at a private ceremony in Hawaii over the weekend.

"Yes, Elizabeth did get married today and we are all thrilled," said Smart's father, Ed, on Saturday.

They plan to honeymoon at an undisclosed location, according to Chris Thomas, the spokesman.

"Elizabeth's desire was for what most women want â€” to celebrate her nuptials in a private wedding with family and close friends," Thomas told the affiliate.

The pair got engaged last month and planned to get married in the summer, but moved up the wedding because of the media attention, the spokesman said.

Gilmour, a native of Scotland, met his bride while she was doing missionary work in France. Smart attends Brigham Young University and also works for ABC News.

Smart made headlines in 2002 when she was kidnapped from her Salt Lake home at age 14 and held captive for nine months. Her kidnapping stunned the nation, and the media covered the monthslong search to find her.

Camera traps in East Kazakhstan have captured video of one of the world's most elusive cats for the first time sincâ€twitter.com/i/web/status/1â€¦B7
cnni

7:23 pm ET August 2, 2021 RETWEET
A familiar graphic may be misleading residents in a storm's path into thinking they are safe from a hurricane's impâ€twitter.com/i/web/status/1â€¦7G
CNNweather

7:16 pm ET August 2, 2021 RETWEET
A familiar graphic may be misleading residents in a storm's path into thinking they are safe from a hurricane's impâ€twitter.com/i/web/status/1â€¦tO
cnni

7:03 pm ET August 2, 2021 RETWEET
Rapper DaBaby has apologized for the false and disparaging comments he made about gay men and HIV during a performaâ€twitter.com/i/web/status/1â€¦Ra
cnni