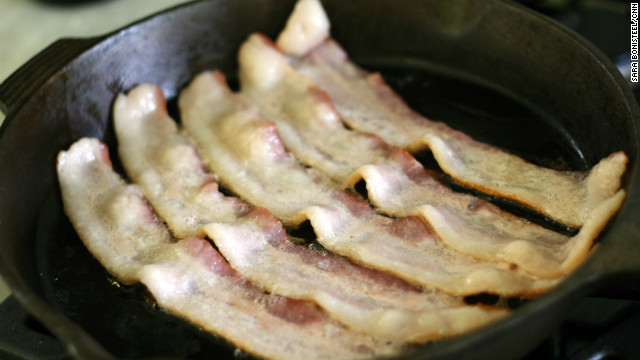 What food could you see being added to just about anything and making it better? If your answer is bacon, you are not alone. Wondering why bacon has become so popular, we reached out to Kat Kinsman, managing editor of CNN’s Eatocracy blog.

“Bacon, the food, is, full-stop delicious, but so are plenty of other foods. Bacon, the concept, has taken on a life of its own.” It's shorthand, Kinsman said, for, “Hey, I’m a food freak, but I don’t take myself too seriously.”

"Pork, fat and salt are pretty much the antithesis of what any nutritionist would counsel you to eat" Kinsman said.

But, as Pete Wells quoted a bacon maker’s wife as saying in his 2003 James Beard Award-winning essay, "Captain Bacon," “And if I can't have bacon on my salad, I just don't care about it."

From a bacon-wrapped pork dish to the fan-favorite Bakon Vodka, we’ve got your craving covered with today’s Gotta Watch.

“Where else does a walking slab of bacon fit right in? The annual event known as “Baconpocalypse Now”, now in its fifth year, is a bacon festival for bacon lovers, by bacon lovers. If you think Bacon and Butterscotch cupcakes sound amazing, this video is for you.

It’s tough to say what the oddest taste to pair with bacon would be but we’re pretty sure this would top most people’s list. The brain child of Seattle-based Black Rock Spirits, Bakon Vodka has recently become a hit.

What do you get when you wrap a layer of bacon around a chunk of spicy sausage and crumbled bacon? A precursor to an angioplasty? Maybe. Or, a 5,000-calorie dish called the Bacon Explosion. Interested in creating this meat-lovers lunacy for yourself? This video will show you how.