Multiple people have been injured in a shooting at the University of Heidelberg in Germany. Police say the gunman iãtwitter.com/i/web/status/1ãÎL0

Pope Benedict XVI admits to attending a meeting about an abuser priest when he was Archbishop of Munich, reversingãtwitter.com/i/web/status/1ãÎJO

The US announced it will reduce staff levels at its embassy in Ukraine, beginning with the departure of nonessentiaãtwitter.com/i/web/status/1ãÎbw

Ukraine has received a second weapons supply shipment from the United States amid the looming threat of a potentialãtwitter.com/i/web/status/1ãÎg1

UK foreign office says that it has information the Russian government is planning to "install a pro-Russian leader"ãtwitter.com/i/web/status/1ãÎLR 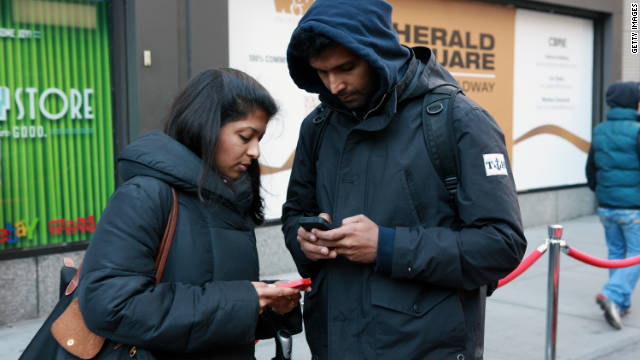 Wireless data use is growing at a dramatic rate in the United States and the wireless spectrum that carries phone calls, text messages and Internet services isn't growing fast enough to keep up with demand.

CNN Money is devoting a week of coverage to the "Spectrum Crunch" and readers also are weighing in on the problem.

CashTheGreen: "This situation would be easily remedied if they would just invest more into upgrading their network and infrastructure, but no, the execs have to line their pockets instead. They won't care one bit about the company once they retire from their short careers with millions."

Alan Elliot "The fix is simpler than it looks, charge what is required to deliver a good quality of service. Maybe data plans will be $100/mo for 1G but it will stop all the mindless surfing and viewing of YouTube on phones. Perhaps the video won't be that funny when you realize it costs you $4.00 to view it."

leonard langsdorf says the spectrum crunch could be a big opportunity for a smart businessperson:

"Seems to me that the next killer app is the one that reduces network bandwidth for smart phones."

Others, like another_engineer, saw is as an opportunity to stamp out some bad behavior:

"Good, I'm sick to death of cell phones and their users. one would think that everyone on earth with a cell phone is a trauma surgeon the way they are "urgently" calling no matter where they are, grocery store, DRIVING.. I even heard a guy on the phone when he was taking a dump in a public restroom."

There also was a lot of debate about whether smartphones were even necessary.

Anon E. Mouse:
"It's not that I'm making some magnanimous effort to save the planet, but I still don't see a need to have a cell phone for any other purpose than making phone calls unless you're a company representative spending a lot of time on the road. Everyone else should be capable of waiting until he/she gets home or to the office to satisfy the addiction."

Thumbs
"There is no need for it, but there is a convenience. You also don't need a dish washer, a clothes dryer, a microwave, etc, but I bet you can't imagine not having them now."

"If we can make a space station fly, we can save the planet." cnn.it/3AoQi13
CNNweather

9:30 am ET January 24, 2022 RETWEET
The Australian Open is facing criticism over its handing of a small protest against the Chinese Communist Party's aãtwitter.com/i/web/status/1ãÎeS
cnni