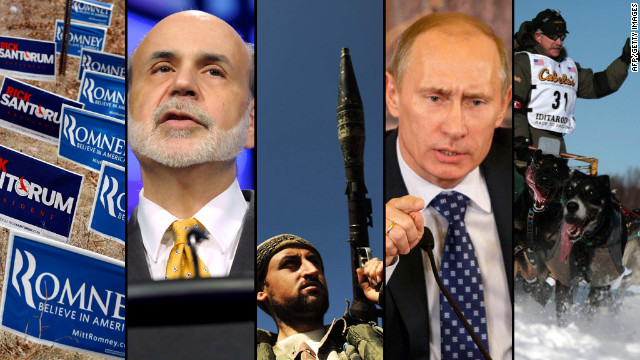 A recent surge in support for GOP presidential candidate Rick Santorum gets important tests this week in Michigan and Arizona, both of which hold primaries on Tuesday, one week before the Super Tuesday contests in 10 states.

Also this week, Wyoming will announce the results of its 20-day caucus process on Wednesday. And Washington state's caucuses are scheduled for Saturday.

Santorum has led Romney in national polling in recent days, thanks in part to strong primary and caucus performances in Colorado, Minnesota and Missouri earlier this month. But by Sunday,Â Santorum's lead was down to 1 percentage point in one poll, with Romney closing the gap after a debate in Arizona on Wednesday.

END_OF_DOCUMENT_TOKEN_TO_BE_REPLACED

At least three people were killed Sunday in the latest attack on Christian churches in Nigeria.

Police said a car packed with explosives rammed into the compound of the Cocin (Church of Christ) headquarters in Jos, police said.

Some church members emerged from the scene covered in dust.

It was not immediately clear who was responsible for the attack.

Nigeria has suffered a rash of attacks on churches in the past year.

Eighteen people were killed in the bombing of a church in Madalla, according to Nigeria's National Emergency Management Agency. The militant Islamist group Boko Haram has claimed responsibility for that attack.

gunman who shot two American officers inside the highly secured Afghan Ministry of Interior was identified Sunday as a junior intelligence officer with ties to a Pakistani religious school, an Afghan counter-terrorism official said.

The gunman who remained at large was identified as Abdul Saboor, an employee in the ministry's intelligence department, according to the official, who spoke on condition of anonymity because he was not authorized to release the information.

"We believe it was 100% linked to the Quran burning because of the religious background of this junior officer. He spent two months in a Pakistani madrassa," the official said.

Saturday's killing of the American officers prompted Gen. John Allen to order several hundred NATO-led International Security Assistance Force advisers to withdraw from ministries in Kabul as a precaution, raising questions about a U.S. military plan that plans to focus on the use of small teams of military advisers as it withdraws troops.

"For obvious force protection reasons, I have also taken immediate measures to recall all other ISAF personnel working in ministries in and around Kabul," Allen said.

Allen's order for ISAF advisers to withdraw includes the interior and defense ministries, among others, the U.S. official said.

(CNN) - Twenty-two Carnival Cruise Lines passengers were robbed of valuables and their passports during a shore excursion in the Mexico seaside resort of Puerto Vallarta, cruise officials said late Saturday.

The passengers were robbed Thursday during a guided trail excursion, according to a statement released by the cruise line.

The cruise line did not provide details of the robbery, saying only that there were no injuries and the tour was suspended on future sailings under further notice.

"Carnival is working with guests to reimburse them for lost valuables and assist with lost passports or other forms of identification," the statement said.

In what the government touts as a move toward reform, Syria's constitutional referendum kicked off Sunday to widespread skepticism that the regime would stop slaughtering civilians.

The referendum on a draft constitution began in polling centers across the country Sunday morning, Syrian state-run TV reported.

But the unabated violence on the ground indicated nothing has changed in the nearly year-long onslaught by government forces.

At least 100 people were killed on the eve of the vote, almost half of them in Homs, according to the Local Coordination Committees of Syria, a network of opposition activists.

And on Sunday morning, rockets fell once again on the besieged Baba Amr neighborhood of Homs, said the Syrian Observatory for Human Rights, another opposition activist group