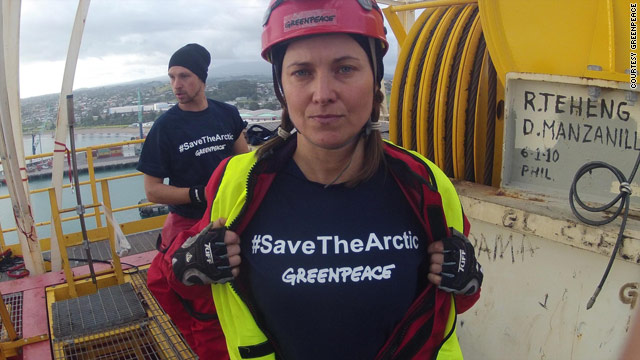 Actress Lucy Lawless, famous for starring in the television show "Xena: Warrior Princess," was arrested along with six other Greenpeace activists early Monday for boarding a drilling ship last week in New Zealand, according to Greenpeace. She and the others who were aboard the ship without permission were released shortly after their arrest, the activist organization said.

CNN.com spoke with Lawless on Friday while she was having a restless night on the Noble Discoverer, a ship leased to Shell Oil. The ship was docked in the Port of Taranaki when the actress and other activists, on behalf of Greenpeace, made it on board to protest drilling in the Arctic.

The group was able to display signs on the Discoverer's 174-foot drilling tower. One sign said "Stop Shell #SaveTheArctic."

Lawless told CNN on Friday that she expected to be arrested for the stunt but that she and the others intended to remain on the ship for as long as possible. She stressed that exchanges between them and authorities had been peaceful.