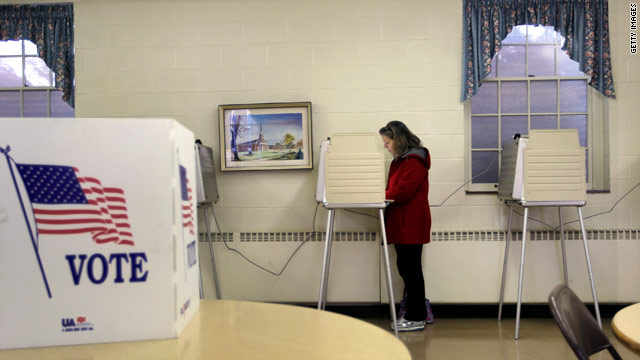 What do you think about the GOP primaries thus far and the candidates' campaigning tactics?
February 29th, 2012
05:01 PM ET

Readers are talking about the tactics of Mitt Romney and Rick Santorum after the Michigan and Arizona primaries. Meanwhile, Democrats have been explaining some mischief as well. Readers compared the candidates and debated open vs. closed primaries.

Santorum's robo call encouraging Democrats to vote for him as a hit against Romney drew lots of ire.

Dan J: "Had it been a general election-style robo call, where Santorum highlighted his strengths and why he should be president (not just the Republican nominee), then it can be defended as attempting to attract all Americans, not just Republicans. That's fine. It wasn't that. Not even close. That makes him a hypocritical sellout sleazebag that clearly puts self before party, and self before country."

Another reader came to Santorum's defense.

CBS: "Santorum is asking Democrats who do not intend to vote for Obama (do you think there might be a few of those?) to become Republican and choose their candidate. He is not asking them to vote Republican so they can choose the weaker candidate so Obama has a better chance."

Dave: "Poor little Mitt. I'm no fan of Santorum, but Mitt has ran a filthy campaign and now that Santorum is hitting back with some tricks of his own, Mitt is whining like a freakin' baby. Get a clue, Mitt. It's this kind of bratty whining that turn people off to you. Being a serial flip-flopper and a spoiled brat doesn't help either."

Some said Santorum is in trouble.

DParke: "Pathetic! Santorum is desperate for votes. He is actually begging votes from Democrats after decrying the practice! Unbelievable! He is the king of the Flip-Flop. Romney flipped his stance 20 years ago. Santorum flipped his stance from 20 days ago just to win! If he needs Democrats to win an election, he will never be able to beat Obama!"

But why wouldn't Santorum attack?

rgcheek: "There is no reason for Santorum to not use Romney's tactics against him. It is only fair to fight fire with fire, so why so much hate directed at Santorum for doing the smart thing here? If you dont like Dems voting in GOP primaries then change the rules across the board and stop whining about Rick finally returning fire. By the way, Romney is a total loser and a fraud. He has no chance against Obama and the GOP racketeers know it."

Still others thought Romney has the edge.

Dave: "Say what you will about Romney, but I guarantee you that he would never, ever, remotely consider pandering to liberal democrats for their primary vote. He may run negative ads against his opponents records and positions but you'll never find him jumping to the other side to gather votes ... never. Santorum clearly has no principles and he's made it crystal clear it's all about 'win at all costs.' How much do voters need to see before they (recognize a) 'take one for the team.' Santorum and Gingrich are precisely the 'Insider Washington Machine Politicians' we're desperately trying to get rid of. If Michael Moore campaigning for his followers to come out today and vote for Santorum doesn't tell you something, then you're hopelessly naive."

This person also used the "taking one for the team" metaphor, alluding to Santorum's remarks during the Arizona GOP debate, in talking about strategic voting.

Scott J: "In my state, Utah, the Republican primary is closed because a few years ago, Democrats crossed to line to vote for the weaker candidate, and he won the primary and lost the general, so the Dems won easily. I am not registered in either party, but allowed to vote in the primary for a Democrat where I voted Hillary knowing full well that Obama was going to take us down the drain if he won. Sadly Obama won my state and my predictions in the 2004 presidential election when I told my wife that Obama would be the next president after Bush's second term. Santorum is taking one for his team!"

But this reader pointed out that open primaries have their benefits, too.

beevee: "I think the primaries should be open for everyone, not just Republicans or Democrats in presidential primaries. The person who gets into the office of president is chief of the country, and it speople regardless of their party affiliation and not just of the people of his party. In congressional and senatorial candidate elections, maybe it is important. Only Republicans and Democratic-leaning people should be voting in choosing their party candidates."

Tex71: "The funniest part was watching Santorum squirm through his transparent attempt to flatter the women in his life, hoping all the American women he has offended will just forget about it! Kind of like the guy who beats his wife, then comes home with flowers the next day. Not going to work. Most American women understand all too well what Santorum would like their lives to be."

But this reader said the party itself is to blame.

sbssue1: "I blame the Republican Party for this situation; It is ashame they are allowing it to continue, because they are the ones who will lose in the end. I would think they would want someone with higher quality than Santorum in office. Why is the party allowing such action by this individual. If this is the way they conduct business, I vote Democratic as will many of the citizens of this fine country. It's disgusting, what is going on today in politics."

Or maybe it's the system.

Publius Novus: "So-called 'open' primaries are, in a word, ridiculous. Why should non-party members have a say on a party's nominees? Political parties are essentially private organizations. They should be able to regulate their membership, within the bounds of the law. Next up: Protestants and Jews will be allowed to vote for the Pope. Boy Scouts will be allowed to elect Girl Scout leaders. Members of the VFW will vote in open elections for officers of the Rotary Club. Why not? That said, Santorum is flip-flopping on this. On the other hand, you have to play by the rules, even if you don't like them and they are stupid."

Now, tell us what you think. Share your opinion in the comments area below and in the latest stories on CNN.com. Or sound off on video via CNN iReport.