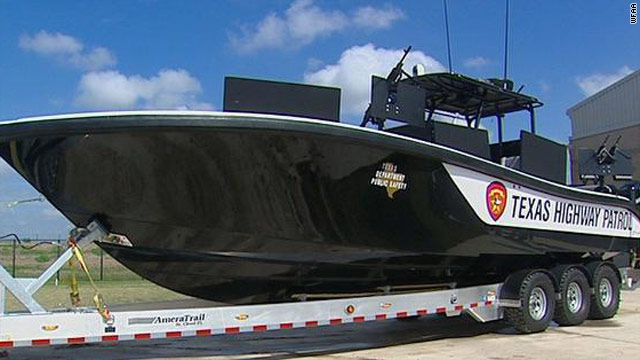 Texas is getting its own navy.

Next month, the state's Department of Public Safety will deploy the first of a fleet of six gunboats on the Rio Grande, the river that forms the border between the state and Mexico, CNN affiliate WFAA-TV reports.

The 34-foot-long boats, each powered by three, 300-horsepower outboard engines, will have bulletproof plating and six machine guns apiece, not unlike the river patrol boats the U.S. Navy used during the Vietnam War.

The vessels will be able to operate in as little as 2 feet of water, according to the report, and will work with U.S. Customs and Border Protection to combat drug smuggling coming across the Rio Grande.

"They're finding out when those people are coming across, and one of the things they need to be able to do is interdict them on the water," Texas state Rep. Paul Workman told CNN affiliate KVUE-TV when the first of the boats, the JD Davis, was christened in December.

"If you're trying to suppress organized smuggling activity, there's no substitute for putting people on the ground," Texas Department of Public Safety Director Steven C. McCraw said at the December ceremony. "The way they're operating right now, you need them on the water as well."

"It sends a message: Don't mess with Texas," Jose Rodriguez, a regional commander of the Texas Department of Safety, told WFAA.

Some Americans across the country are fleeing their homes from wildfires and other effects of climate change, askinâ€twitter.com/i/web/status/1â€¦Fo
CNNweather