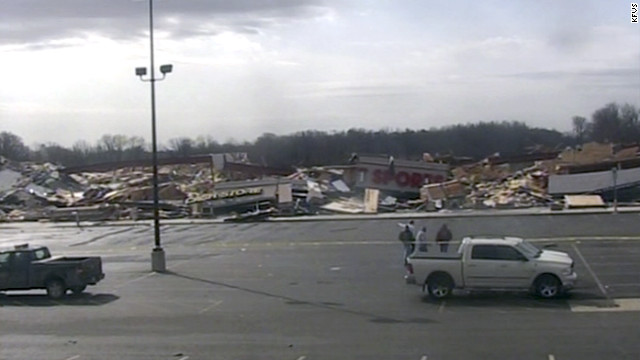 What an EF4 tornado is

A tornado that hit an Illinois city during a storm that killed at least six people there Wednesday has preliminarily been given a rating of EF4 – the second-most powerful on the Enhanced Fujita Scale, according to the National Weather Service.

A report indicated the tornado in Harrisburg, Illinois, had winds estimated at 170 mph. EF4 tornadoes have wind speeds between 166 mph and 200 mph.

The Enhanced Fujita Scale rates tornadoes by estimated wind speed, which is determined not by measurements, but by observations of the damage left behind, according to the National Weather Service’s Storm Prediction Center.

To get the wind speed, the weather service goes to “damage indicator” tables that describe the wind speeds that would be required to do certain types of damage to certain structures. For example, if the exterior walls of one- and two-family homes collapsed, but not the interior walls, the service would consult the one- and two-family home table and find that wind speeds of about 132 mph were needed to do that.

A tornado of 132 mph would have an EF2 rating, which encompasses tornadoes between 111 mph and 135 mph.

EF0 is the weakest Enhanced Fujita rating, and EF5 is the strongest. Below is a description of the categories, with the general kinds of damage that may be associated with them.