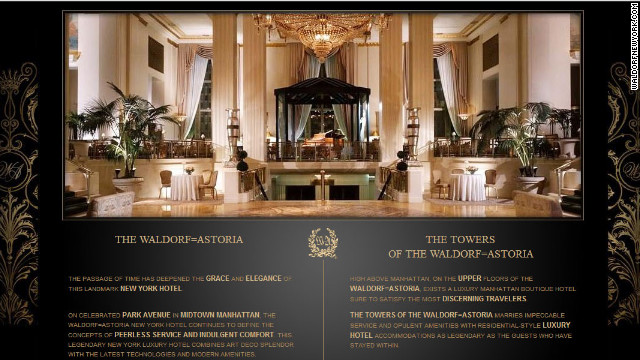 The Waldorf Astoria hotel in New York City is cutting quite a deal for two of its former customers.
March 2nd, 2012
10:39 AM ET

A sampling of Friday morning's headlines from some of CNN's affiliates nationwide:

Sixty years ago, Joan and Isidore Schwartz spent $16.80 for their wedding-night stay at New York City's legendary Waldorf Astoria hotel. Now, for their 60th anniversary, the hotel - whose room prices now start at $319 - is letting them have a suite of rooms for the 1952 price, CNN affiliate ctnow.com reports.

To cut down on opportunities for bullying and fights, a middle school in Louisville, Kentucky, has outlawed talking in the hallways. Students who chat during the few minutes they're given to get from class to class may get detention, CNN affiliate WDRB reports.

A worker accidentally nailed his left hand to the roof of a home with a nail gun in Coconut Grove, Florida, and rescuers needed 90 minutes to conduct the tricky moves to free him, CNN affiliate WFOR reports.