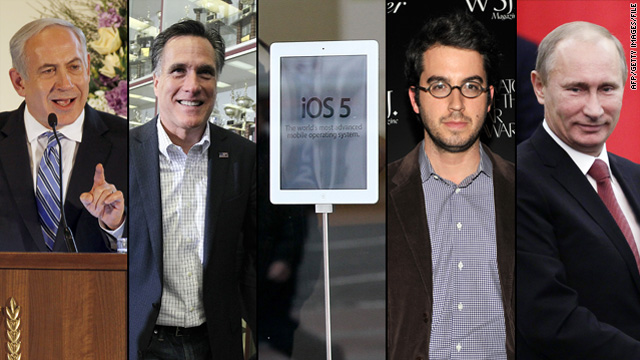 Netanyahu, Obama to meet amid high tensions with Iran

Days after a trip to Canada in which Israeli Prime Minister Benjamin Netanyahu repeated that Israel reserves the right to defend itself against Iranian threats, the Israeli leader is due to meet with U.S. President Barack Obama in Washington on Monday.

Iran is sure to be one of the topics of discussion. Tensions between Iran and the West have risen in recent months over its nuclear program, after a scathing report in November from international inspectors that said Iran could be developing nuclear weapons. A more recent report from the inspectors, noting that Iran was increasing its uranium enrichment capacity, said Iran blocked them from a key military facility.

The United States and its allies have long suspected Iran is developing such weapons, though Iran has insisted that its nuclear program is solely intended for civilian energy purposes.

Israeli leadership, fearing the possibility of its enemy's having nuclear weapons, has hinted that a unilateral pre-emptive military strike against Iran is a possibility.¬ÝObama, in a recent interview with The Atlantic, cautioned against such a strike, suggesting it would produce worldwide sympathy for Iran at a time when it has very little. He told The Atlantic, as he told the American Israel Public Affairs Committee's annual policy conference in Washington on Sunday, that although Iran's having nuclear weapons is unacceptable to the United States, and that he isn't taking any option off the table, different pressure such as sanctions may make Iran change its course.

Romney on hot streak ahead of Super Tuesday

GOP presidential candidate Mitt Romney is on a bit of a roll heading into the Super Tuesday contests, in which 10 states will hold primaries or caucuses and have their say in the Republican nomination race.

Romney, a former Massachusetts governor, managed to shake off a recent rise in rival Rick Santorum's popularity, winning contests in Michigan, Arizona, Wyoming and Washington¬Ýstate last week. Romney has a¬Ýlead in the delegate count¬Ýon the strength of results in early primaries and caucuses.

In Ohio, one of the states with the most delegates in play Tuesday, Romney and Santorum were virtually tied in a poll released Sunday, with Santorum up 34% to 32% among likely Republican primary voters.

Former House Speaker Newt Gingrich says he needs to win his home state, Georgia, on Tuesday to stay in the race, and a poll released Saturday showed he had a double-digit lead there over his nearest competitor, Romney.

Jonathan Safran Foer has enjoyed success with ‚ÄúExtremely Loud & Incredibly Close‚Äù and other works. The novelist has much to be proud of yet remains humble, say those who know him. In the words of one friend, he‚Äôs ‚Äúextremely shy‚Äù and ‚Äúincredibly bold.‚Äù

CNN‚Äôs Elizabeth Landau‚Äôs profile of Foer will hit CNN.com‚Äôs homepage on Monday. But you can get a sneak peek here.

Here comes the iPad 3 (we think)

Apple isn't saying whether the "special event" it's planned in California on Wednesday is the launch of the iPad 3. But pretty much all of the journalists covering Apple expect the company to unveil the latest version of the device that virtually defined the tablet market when it was introduced in 2010.

There is speculation that the iPad 3 may come with a stronger, bigger battery - making the new tablet thicker than the previous version, CNNMoney reports. Another rumor is a high-pixel-count screen that's already available on the iPhone 4S.¬ÝOther reports claim the iPad will come with a faster processor, a better camera, the Siri voice assistant and the ability to run on 4G cell networks - and be about¬Ý$60 more expensive than its predecessors.

The unveiling would come at a time when competitors are beginning to put up a bit of a fight, CNN's Doug Gross reports.¬ÝAmazon made a splash with its simpler, cheaper Kindle Fire over the holidays, and rival bookseller Barnes & Noble countered with its popular Nook Tablet. The Acer Iconia A500 offers more memory than the iPad 2, while other companies have ¬Ýbegun flooding the market with devices that are smaller and cheaper than Apple's standard-bearer.

Will Putin avoid a runoff election?

When final results of Sunday's¬Ýpresidential election in Russia are announced this week, Vladimir Putin may not need a runoff vote to reclaim the office.

Russians went to the polls on Sunday, and pre-election polls showed that Putin, who was president from 2000 to 2008, may get more than 50% of the vote, in which case he would avoid a runoff election and win the presidency outright.

Putin has been prime minister since stepping down from the presidency in 2008 because of¬Ýa law barring him from serving more than two consecutive terms. The current president, Dmitry Medvedev, is not running for another term.

The election comes about three months after parliamentary elections that kept Putin's ruling United Russia party in power, albeit with a smaller majority. The results caused¬Ýmass protests in Russia, with protesters claiming that the results were rigged in United Russia's favor.¬ÝThe demonstrations were considered, among analysts and political observers, the largest in Russia in the past two decades. Protests are expected again on Monday if Putin is declared Russia's next president

4:23 pm ET May 7, 2021 RETWEET
@DGUNZ22 @CNN actually we have had a reporter there for a while. @BrianToddCNN has covered the case daily. i can‚Äôttwitter.com/i/web/status/1‚Ä¶6Ep4
sarasidnerCNN