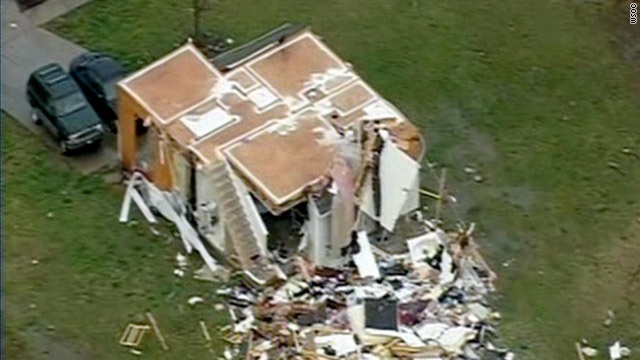 This photo shows damage to a North Carolina home from a tornado. Three children were thrown from the home during the storm.
March 5th, 2012
11:56 AM ET

Below is a sampling of Monday morning's headlines from some of CNN's affiliates nationwide:

WSOC: 'Miracle babies' out of hospital after being sucked up by tornado

When a Tornado ripped through Latonya and Tyrone Stevens' Mecklenburg County home it hurled three of their children into the air.

The roof of their North Carolina home was ripped off by mighty gusts of wind as storms rolled through and the structure was destroyed.

"The next thing I remember is I was sitting on the top of the house with my oldest twin Ashley and everything was gone," Latonya Stevens told CNN affiliate WSOC.

One child was found under the rubble of the home. Another was thrown close to a nearby highway. A third child wound up in a neighbor's yard.

“His room is in the front of our house, so he had to go clear across the back yard and over the fence,” Tyrone Stevens told WSOC.

Doctors at a local hospital are calling the children "miracle babies" since they are now safe and were able to leave the hospital.

Normally it is a good thing when people are buzzing about your team during Spring Training. But it is a bit different when the actual buzzing is thanks to a swarm of bees that forced more than a 40-minute delay during a game between the Arizona Diamondbacks and San Francisco Giants in Scottsdale, Arizona.

The bees swarmed from right field towards the Giants dugout according to CNN affiliate KPHO and players decided they didn't want to try to cross them and get stung. So ground crews and officials worked hard to try to get them out of the stadium.

How'd they do it? With some unexpected tools: with cotton candy and lemonade to sway them away from spectators, KPHO reported.

Read more about the incident and  see the massive swarm

A quick-thinking young girl is being heralded as a hero after helping save her mom and two sisters.

When Kali Collins' mother went into diabetic shock while she was driving the girl dialed 911.

“This is an emergency Our car broke down and my mom’s dying and she’s sick and we need help."Kali Collins to the 911 dispatcher according to CNN affiliate KDVR. “The tire is broken and she just keeps driving."

Kali and her two twin sisters were in the back seat when the car crashed but kept on going. Her mom was unresponsive, according to KDVR.

So Kali unbuckled her mom's seatbelt to reach her purse and dial her father and then 911 for help.

When police arrived Kali got out of the rolling car so officers could get inside, park it, and make sure everyone was safe and sound.

Read more about Kali Collins' description of what happened