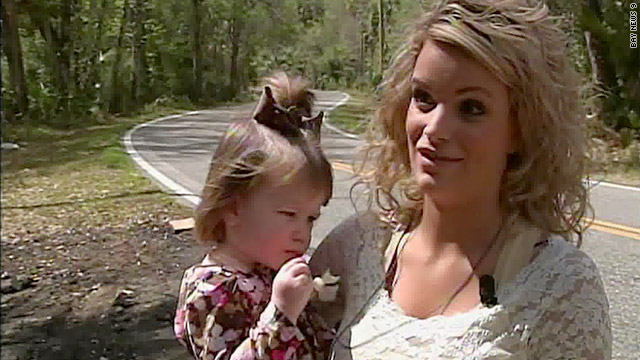 Kristyn Dominy said though a driver flipped her off she still felt compelled to help save her from her burning car.
March 7th, 2012
12:00 PM ET

Affiliate roundup: Woman saves driver who flipped her off; a curse-free school?

A sampling of Wednesday morning's headlines from some CNN affiliates nationwide:

BN9: Woman helps save driver that flipped her the bird

Kristyn Dominy helped save the life of a mother and child after their car burst into flames only minutes after the driver had passed her and flipped her off.

Dominy was driving in Crystal River, Florida, when a woman driving erratically sped past her.

"She did flick me off whenever she passed me," Dominy told CNN affiliate Bay News 9.

But as Dominy kept driving she saw something horrific.

"Whenever I came around that corner...is whenever I saw the vehicle up in flames," Dominy said.

That's when Dominy saw the woman was unable to escape the vehicle. The driver's child was also tangled in a seat belt and on fire, Dominy said.

“My first thought when I came around the corner and saw that her vehicle was on fire, I was thinking karma, but the same time, I could never, even though she flicked me off down the road, I could never just sit there and watch that happen.”

So she helped rip the child from the car and called 911.

Dominy said she didn't do anything special, but hopes that others will learn from her act of kindness.

Read more of her story here

Enough with all those $*@$-ing words in school!

That's the message a high school in California has for students that let dirty words slip or nasty jokes fly. They've designated their school as a no-cussing zone as a way to set an example for kids. And it's all for a good cause.

"Clean language, clean campus, clean and respectful classrooms," that's the goal Ossil Macavinta, who is the head of the no-cussing club, told CNN affiliate KESQ. "If we can achieve that as a club, I think we will have more high performing students on campus."

Any students who sign the pledge and end up cursing will put money in a donation jar in each of the high school's classrooms. The money will benefit a local food kitchen.

Read more about the effort here

Lawmakers are approving an effort that allows owners and breeders to artificially color or dye animals like bunnies or ducks. The process has been outlawed for 45 years in Florida.

“It is a way of ensure that we don't have a lot of adorable ducks, rabbits and chickens that are given away at Easter time and look so cute, and then two or three or four months later nobody wants them,” Florida Senate Democratic Minority Leader Nan Rich said, according to CNN affiliate WTXL.

So, in the spirit of Easter, I guess, get your dyeing skills ready Florida.

Read more about the story here