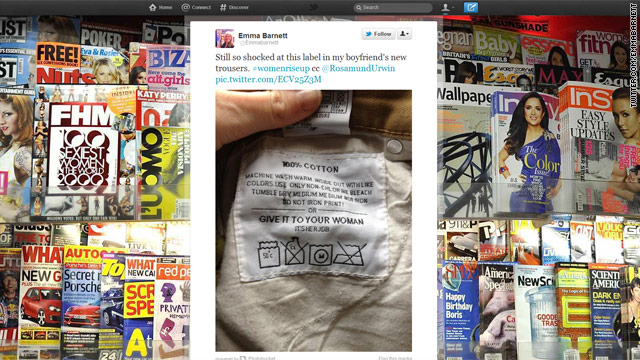 This tweet from British journalist Emma Barnett show's the laundry tag from a pair of Madhouse pants
March 8th, 2012
10:28 AM ET

UK pants label: Give laundry to 'your woman'

A firestorm set off in a pair of men's trousers has left a British apparel company deflecting allegations of sexism and denying that it thinks laundry is strictly a woman's job.

It's not every day that clothing care instructions spark controversy. But that's what happened after British journalist Emma Barnett picked up her boyfriend's pants over the weekend while tidying the house.

Underneath the usually customary "machine wash warm" instructions, the tag offered a less appropriate option: ŌĆ£OR ŌĆō GIVE IT TO YOUR WOMAN, ITŌĆÖS HER JOB.ŌĆØ

Barnett tweeted an image of the tag on Monday, prompting an immediate outcry on social media and demands to out the company, Madhouse. The ensuing controversy has divided the citizenry into two camps: those who thought it was hilarious, with some asking how they can buy a pair, and those who found it offensive.

"Now normally I am the type of person who can stomach, and often smile along, with a touch of what has just become known as casual sexist 'banter,ŌĆÖ " Barnett, digital media editor for the the Daily Telegraph, wrote in a column.┬Ā

"Usually sexist jibes, statements, or even t-shirt logos, have some kind of juvenile or puerile humour to them. ThereŌĆÖs more often than not a slight hint of tongue-in-cheek that allows most women to just pass off the remark or slogan as ŌĆśstupid banterŌĆÖ ŌĆō even if they are seething inside," she said.

"There was no attempt at wit, and unlike the Topman t-shirts, which offended so many with their brazen slogans to be worn across young menŌĆÖs chests ŌĆō this was a hidden message ŌĆō or rather an order, intended to encourage women to reassume their once their ŌĆśproper placeŌĆÖ (in the home) and young men to maintain the expectations of their grandfathers.

Many who took up the issue on social media agreed with her.

"Way to alienate a substantial part of your potential customer base :O," Mfy Nixon said, echoing the sentiments of many who would later join the discussion on Twitter.

Others, including women, saw humor in the situation, from the label itself to the ensuing controversy.

"Wash labels in these chinos say "Give it to your woman" #SexistHeros ŌĆ”although women all over will riot. #BigMistake," Joe Richardson said.

Others criticized Madhouse for taking a day to respond with the claim that the trousers were manufactured by a brand they stock and that they did not proof the care instructions.

"There was never any intention to offend it is obvious that we need to be a lot more careful when proofing sold goods," Madhouse said on its Twitter feed. "If we had noticed the label the items would never of been put in our stores. A mistake was made and we apologise for this."

The company has not issued a statement and did not respond to phone and e-mail requests for comment. But it has been responding to tweets, including those showing support.

"Glad to see that someone has found it funny. We did not instigate this and the labels on supplied jeans will be proofed better," the company said in response to a comment┬Āthat the label was "brilliant."

What do you think about the tag? Weigh in and let us know in the comments below.

President Biden's pick to be US Ambassador to China called for a continued commitment to the longstanding "One ChinŌĆtwitter.com/i/web/status/1ŌĆ”l8
cnni

8:43 pm ET October 20, 2021 RETWEET
A fire that destroyed a US warship last year was "clearly preventable" and was the result of a series of systematicŌĆtwitter.com/i/web/status/1ŌĆ”zM
cnni