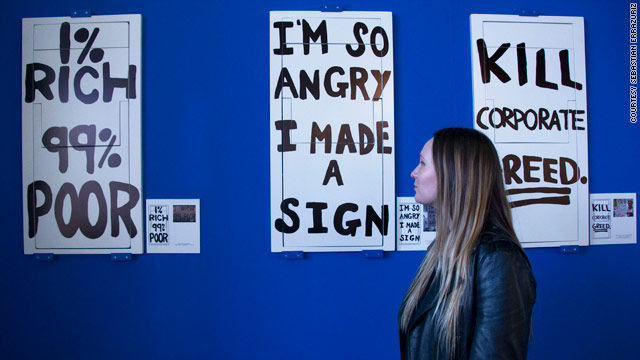 Sebastian Errazuriz is at it again, making political statements with his art. This time, the target is the 1% - of which he may be a member when the art exhibit is through.

The Chilean-born artist used placards from the Occupy Wall Street movement as his muse and painted some of the movement's slogans onto wooden fold-out chairs. The acrylic paint messages include, "Hungry? Eat a Banker," "Kill Corporate Greed" and "Too Big to Fail is Too Big to Allow."

"The artist wishes to support the 99% by inviting collectors (representing the 1%) to purchase the complaints as art or furniture, thus introducing the ideas of one group into the homes of another and at the same time getting the rich to support the cause of the 99%," a news release states.

There are eight Occupy Chairs, and 10 of each design. The eight designs are on display at the Cristina Grajales Gallery booth at the Armory Show, an annual modern art fair in Manhattan that began Thursday and runs through the weekend.

Though Errazuriz, 34, doesn't shy away from bold statements - such as, say, planting 1,100 crosses under the Brooklyn Bridge to highlight the number of deaths in New York each week - his latest endeavor made him nervous.

"I honestly didn't know if the 1% would buy the Occupy Chairs or feel attacked and insulted," he said. "The other gallery people looked at us like, 'What the hell are (they) doing bringing protest signs to an art fair focused on collectors who are obviously all 1%?' "

He noticed, however, that the union workers setting up the booths had a markedly different take. They were calling their buddies over, "grinning happily, fishing out their phones and taking snapshots of the chairs," Errazuriz said.

Though many of Errazuriz's projects focus on the "dichotomies of life and death," he has made his share of political statements. In 2006, he planted a magnolia tree at midfield of Chile's National Stadium where dictator Augusto Pinochet tortured and killed political prisoners in 1973. A year earlier, he made a coat out of teddy bears as a statement on the comeback of fur on fashion runways. 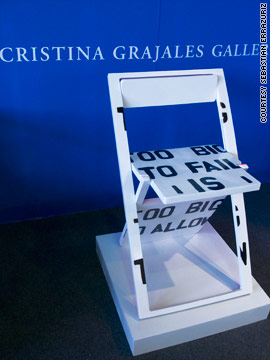 The Occupy Chairs were inspired by placards from the Occupy Wall Street movement, the artist says.

Heâ€™s also created furniture and sculptures and designed clothing, including sexy dresses made of latex gloves or zippers.

Last time we checked in on Errazuriz in 2010, he was highlighting the U.S. military suicide rate by turning the cinder-block wall outside his Brooklyn studio into an art fixture. The public art display demonstrated how many troops had been killed in combat versus how many took their own lives.

Of his latest project,Â Errazuriz said he was surprised by the popularity of the Occupy Chairs. On the first day of the Armory Show, he sold a dozen of them. The price tag? A hefty $2,500 apiece.

"I was hoping to be able to tempt a few collectors to take the complaint signs home. I never expected them to become a great sale," he said.

The news release about his exhibit says that Errazuriz is donating a portion of the proceeds to the Occupy movement, but he won't disclose if he will donate 99% or succumb to his own greed and give 1%.

Pressed on the question Friday, Errazuriz told CNN that it was more a matter of soul searching than a marketing gimmick.

"Leaving the percentage of the donation a mystery was to question my own motives and gauge my own temptation, depending on the amount sold," he said.

He concedes that his decision got a lot tougher after sales surpassed his expectations - to the tune of $30,000 in one day.

"I figured if I sold one or two, donating most of the money seemed easy. Now that the amounts are higher, the temptation naturally gets a lot stronger, and I start getting a glimpse of what the 1% probably feels."