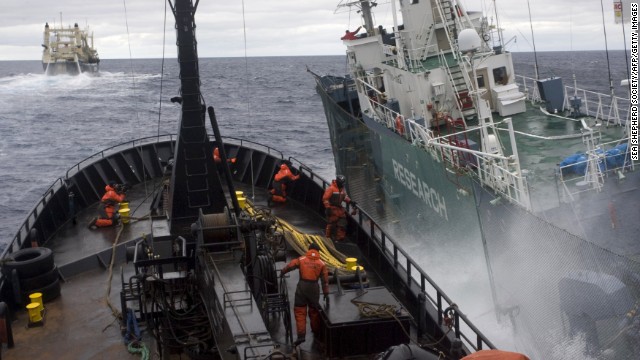 Japan's whaling fleet was headed home from the southern ocean after ending its annual Antarctic hunt with only a third of its expected catch, news reports from Japan said Friday.

The hunt ended three days ago with a catch of 266 minke whales and one fin whale, officials from Japan's Fisheries Agency said, according to one report from Australia's ABC news online.

The Sea Shephed Society, which sent a fleet of vessels to the southern ocean to block the hunt, proclaimed victory on its website.

"Operation Divine Wind is over! The Japanese whalers are going home!" the Sea Shepherd headline read.

"There are hundreds of whales swimming free in the Southern Ocean Whale Sanctuary that would now be dead if we had not been down there for the last three months. That makes us very happy indeed," Sea Shepherd's Paul Watson is quoted as saying on the organization's website.

Watson said that with the high-seas showdown, "the whaling season was effectively over for the season."

Japan hunts whales every year despite a worldwide moratorium on whaling, utilizing a loophole in the law that allows for killing the mammals for scientific research.

Sea Shepherd said it would be back to block the Japanese fleet if it returns this year.

“If the Japanese whalers return, Sea Shepherd will return. We are committed to the defense of the Southern Ocean Whale Sanctuary,” Watson said on the website. “No matter how long it takes, no matter how risky or expensive. The word 'sanctuary' actually means something to us and that something is worth fighting for.”