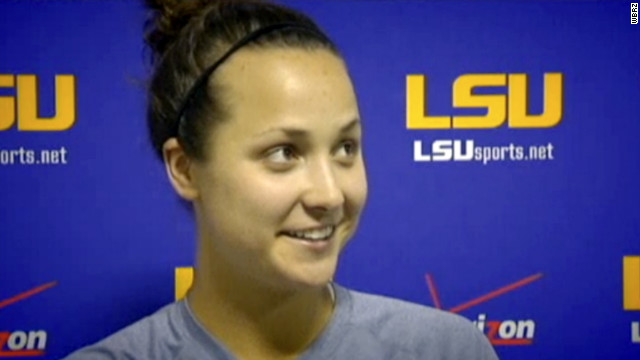 Ex-LSU soccer star Mo Isom would like to bring her kicking talents to one of the best football programs in the nation.
March 9th, 2012
04:57 PM ET

Mo Isom already has been quite a presence at Louisiana State. The first LSU athlete to be voted homecoming queen, she was one of the top goalkeepers in the Southeastern Conference for four years, displaying not only useful shot-stopping skills but also the type of powerful kicks that score goals from the other end of the soccer field.

Now she’s trying to show her kicking power translates to that, ahem, other kind of football. The one on the gridiron, where LSU fields one of the best programs in the country.

Isom, a 21-year-old whose collegiate soccer career wrapped up last fall, is one of a few students trying out for placekicker on LSU's football team - last year's national championship runners-up - this month.

But she made some long field goals and deep kickoffs in tryouts this week, and she says she’d be ready to take some big hits in one of the nation’s premier football conferences, the SEC.

“Do you see my size?” Isom told CNN affiliate WBRZ on Thursday, the second day of placekicker tryouts at LSU. “Everyone thinks that I am the average size and weight of a female. I am 6-foot-1, almost, and weigh about 190 pounds. Yes, I just said that on camera. It is all muscle."

LSU head coach Les Miles has said it’s unlikely the team will take a walk-on kicker, unless that kicker is exceptional, The Times-Picayune reported Friday.

In a news conference this week, Miles said Isom would be considered “if she gave us an opportunity and an advantage."

“There has to be an advantage to the team,” Miles said. “The good thing about this is that she’s an athlete. She’s been through team before, and she understands commitment. I would have much less reservations with her than I would with any number of other people who frankly didn’t know what they were getting into.”

Miles said he had no timetable on making a decision on tryout placekickers.

An LSU video posted on YouTube this week shows Isom hitting a 40-yard field goal indoors.  She said she struggled with outdoor kicking on Tuesday because of the wind, but hit two 50-yard field goals on Thursday, The Times-Picayune reported.