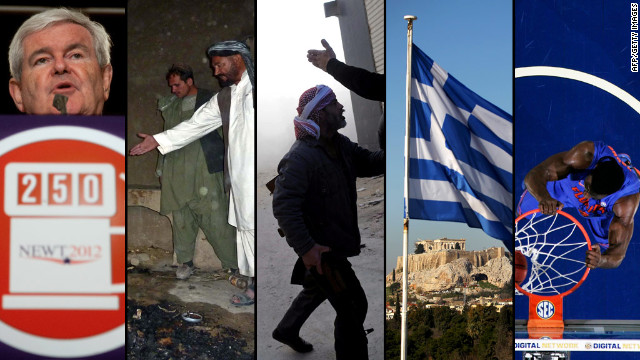 Gingrich has stressed the importance of winning in the South, where he polls well, and he has been ahead in Mississippi, according to a recent poll of likely primary voters. The poll showed Gingrich with 35% support in Mississippi, followed by Romney with 31%,  Santorum with 20% and Ron Paul with 7%.

The soldier, Afghan officials said, went from house to house in two villages in eastern Afghanistan and killed the 16, including nine children and three women. NATO's International Security Assistance Force confirmed that a soldier had gone off base and fired on civilians before turning himself in but did not say how many victims there had been.

Israel and Gaza appear to be in a new cycle of attacks and counterattacks. Israel launched a string of airstrikes against targets in Gaza over the weekend, which Israel says are a response to more than 100 rocket attacks from Gaza into Israel since Friday.

One of the Israeli airstrikes targeted a suspected terrorist moments before he fired a rocket at the city of Ashdod, the Israel Defense Forces said in a statement.

Israeli Prime Minister Benjamin Netanyahu suggested Sunday that the new cycle of attacks  resulted from a successful Israeli strike on " an arch-terrorist who organized many attacks against the state of Israel." Two people were killed in that strike - Zuhair al-Qaisy, secretary-general of the Popular Resistance Committees, and Mahmoud Ahmad Al-Hanini, a Hamas military leader.

Euro-area finance ministers are expected to meet on Monday in Brussels, where they could finalize a second €130 billion bailout from the European Union and International Monetary Fund, CNNMoney reports.

Last week creditors agreed to a plan to restructure Greek government bonds and reduce its debt load by by more than €100 billion , meaning Greece cleared its final hurdle to qualify for the bailout program.  Investors who own Greek bonds could now see losses of up to 75%, but not doing the agreement could have left Greece facing default, putting its financial future and possibly that of the euro zone at great risk.

The IMF also is expected to decide on whether to OK its share of the bailout next week. Greece, the nation at the center of Europe's debt crisis, has been struggling with an unsustainable level of debt and an economy that has been in recession for years,  CNNMoney's Ben Rooney writes. Under its second bailout program, Greece has agreed to implement austerity measures and broader reforms to make its economy more competitive.

"The president and the prime minister look forward to a great game between some of our nation’s finest collegiate athletes," a White House official said last week.