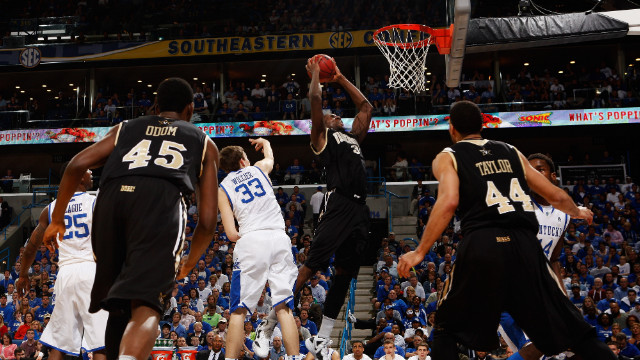 Picking the teams to win NCAA tournament can be ... well, madness

Geez, how am I supposed to get my bracket done with my bosses asking me to do all this work? Ridiculous.

March Madness, that magical season of underdogs and lost productivity, is again upon us, and folks across the nation will scramble from Web page to Web page for the next three days, hoping to get an edge in this yearŌĆÖs NCAA college basketball tournament.

Before you waste ludicrous amounts of your and your employersŌĆÖ time, consider this: Butler and VCU composed half of last yearŌĆÖs Final Four. I feel pretty confident in the assumption that almost no one reading this picked that pair.

Call the Bulldogs and Rams sleepers or flukes if you like, but it was ButlerŌĆÖs second-straight Final Four, and VCU has made it back to the Big Dance this year, albeit as a 12 seed.

If last year taught us anything, itŌĆÖs that the term Cinderella, given to no-name teams who enjoy unexpected success in the tournament, is overplayed. Way overplayed.

This yearŌĆÖs matches promise to be just as unpredictable. If you were paying attention over the weekend, you saw that Michigan State was the only No. 1 seed to win its conference tournament.

Tournament mainstays North Carolina and Kentucky fell to Florida State and Vanderbilt, respectively. Syracuse didnŌĆÖt even make it to its conference final, losing a thriller to Cincinnati at Madison Square Garden on Friday.

The No. 2 seeds also boast only one conference tournament champion, the Missouri Tigers, who have to be feeling pretty screwed this morning. If you canŌĆÖt snare a No. 1 seed by going 30-4 and trouncing a ranked Baylor team in the Big 12 Tournament, something isnŌĆÖt going your way.

Still, the Tigers have to be feeling better than Seton Hall, Washington and Mississippi State, which all won at least 20 games in tough conferences yet are now NIT, Not in the Tournament.

But youŌĆÖre not worried about the NIT, are you? No one fills out brackets for that. Good luck even finding one.

Today is about March Madness, and you need to know who will be this yearŌĆÖs VCU. It could be ŌĆ” well, maybe VCU, except this yearŌĆÖs Rams squad opens against a tough Wichita State team that up put up 27 wins behind big man Garrett Stutz and unsung point guard Joe Ragland. The Rams could also face the top-ranked Kentucky Wildcats and their resident alien Anthony Davis in the Sweet 16 round if they win their first two matches.

SI.com college hoops guru Seth Davis has a few more sleepers for you. He sees 14-seed Belmont knocking off No. 3 Georgetown and the UNLV Runnin' Rebs going deep into the tournament, while Wisconsin and ACC Tournament champion Florida State leave the dance early.

Get all your tipoff times from SI.com

Exemplifying just how tricky a science bracketology can be, DavisŌĆÖ colleague, Luke Winn, has a totally different take on Florida State. Winn predicts the Seminoles will make the Final Four ŌĆō after Vanderbilt follows up its SEC Tournament win over Kentucky by toppling Syracuse.

If youŌĆÖre more of a stats-oriented picker ŌĆō as opposed to, say, letting a coin flip or mascot ferocity determine your selections ŌĆō NCAA.com has a Bracket Facts Generator this year. It allows you to select the match-up by tournament seeds and displays a range of historical statistics, such as average points per game or assist/turnover ratio.

Of course, you might just be better off checking in with Las Vegas. Say what you will about bookies, but you can bet your bracket buy-in and then some that they did more research than you. It'd be tough to beat them.

You might have a better shot at beating Wolf Blitzer, Don Lemon and the rest of CNNŌĆÖs anchors. Head over to NCAA.com and you can enter the CNN Bracket Challenge.

No matter how you pick your bracket, just remember you have a 75 gazillion-to-1 chance of picking every game perfectly ŌĆō and no matter how much college hoops youŌĆÖve watched this year, you can lose at any given moment to a colleague who doesnŌĆÖt know Kris Joseph from Kris Jenner.

Just keep the country's gross domestic product in mind while you shrug off your duties to find that winning formula.

Scientists know that air pollution can make it difficult to breathe and may ultimately cause serious health problemŌĆtwitter.com/i/web/status/1ŌĆ”dt
cnni

Scientists know that air pollution can make it difficult to breathe and may ultimately cause serious health problemŌĆtwitter.com/i/web/status/1ŌĆ”dt
cnni