US officials are assessing a report of a leak at a Chinese nuclear power plant but don't yet think the facility isātwitter.com/i/web/status/1ā¦bQ

Ned Beatty, the character actor who made his big-screen debut in "Deliverance" and was nominated for an Oscar for "ātwitter.com/i/web/status/1ā¦jq

A judge in Houston dismissed a lawsuit against a hospital by employees who opposed a Covid-19 vaccine mandate as aātwitter.com/i/web/status/1ā¦U2

Israel has a new prime minister as Benjamin Netanyahu's rival Naftali Bennett wins a parliamentary vote to form a gātwitter.com/i/web/status/1ā¦aH

Apple told Don McGahn that the Justice Department sought account records for him and his wife while he was Trump'sātwitter.com/i/web/status/1ā¦HL 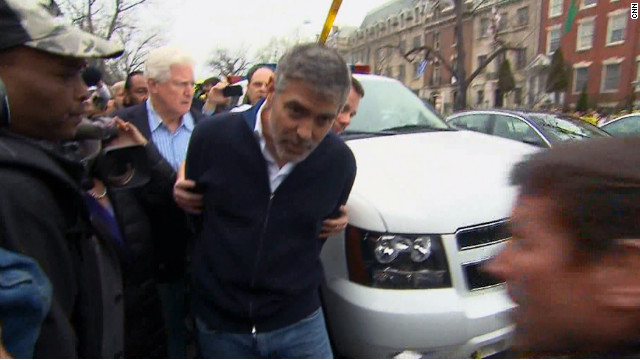 Actor and activist George Clooney, who just returned from a trip to Sudan, is taken away during a protest outside the Sudanese Embassy i Washington on Friday,
March 16th, 2012
10:51 AM ET

Actor George Clooney was detained Friday morning during a protest in front of the Sudanese Embassy in Washington.

On Wednesday, Clooney testified before Congress about "a campaign of murder" under way in Sudan, where villagers run for the hills to hide from bombings on a daily basis.

"What you see is a constant drip of fear," Clooney said, a day after returning from a trip in which he and a small team of fellow activists managed to enter one of the most devastated areas, the Nuba Mountains in South Kordofan.

"We found children filled with shrapnel, including a 9-year-old boy who had both of his hands blown off," Clooney told the Senate Foreign Relations Committee.