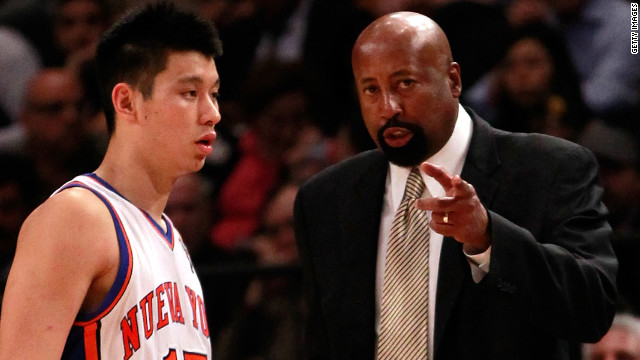 "Linsanity," the worldwide craze over the exploits of New York Knicks point guard Jeremy Lin, has flamed out quicker than the lifespan of a firefly.

"R.I.P. Linsanity" read a headline emblazoned on a tombstone pictured on the back page of the New York Post on Friday. "Briefly beloved Broadway smash hit, February 4, 2012, to March 14, 2012," the remaining inscription said. 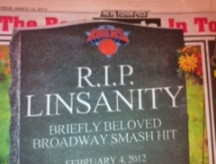 Lin, a 23-year-old Harvard graduate, burst onto the basketball scene in early February when then-Knicks coach Mike D'Antoni called him off the bench as the Knicks struggled against the New Jersey Nets. Lin responded with 25 points, leading the Knicks to victory. A seven-game winning streak, including a victory over All-Star Kobe Bryant and the Los Angeles Lakers, followed, with Lin coming up with clutch plays to lead the way.

The winning streak lifted the Knicks from also-rans to playoff contenders. Lin jerseys sold out in sporting goods stores. Lin got a special invite to participate in an All-Star weekend game for the league's future stars. International attention spiked, and Lin had to ask that reporters in Taiwan leave his grandmother alone. Even President Obama took notice.

But like a Wall Street stock, it's performance over time that establishes equity, and that's where Lin's value has withered.

The Knicks have lost eight of their past 11 games, and Wednesday, D'Antoni resigned, replaced in the interim by NBA veteran coach Mike Woodson.

Woodson emphasizes defense and ball control on the court, the opposite of the fast-paced style that was favored by D'Antoni and suited to Lin's game, according to New York media reports.

"Lin said Woodsonâ€™s offense will be 'challenging' for him, saying Dâ€™Antoniâ€™s system was 'perfect for me,' " Knicks writer Marc Berman said in the "tombstone" article in Friday's New York Post.

Lin scored only six points and had six turnovers in his first game under Woodson this week.

Additionally, Woodson likes the ball to be in the hands of veteran players, according the New York media, and the Knicks have two of the league's biggest veteran stars in Carmelo Anthony and Amar'e Stoudemire.

"I want everyone to know that when it comes [crunch] time and I got to get a big shot, Iâ€™m going to Melo and Amarâ€™e and guys who have done it," Woodson told the Post.

â€śHeâ€™s going to utilize his leading scorers, myself and Carmelo Anthony, make sure he takes advantage of every opportunity on the court,â€™â€™ the Post quoted Stoudemire as saying. â€śWeâ€™ve been profound scorers all our careers. He wants to make sure we take advantage of that.â€™â€™

It must be noted that Anthony was out with an injury when Lin led the Knicks on that February winning streak, and there were always questions about how Anthony, who takes more than 20 shots a game, would get along in an offense led by Lin.

During the peak of Linsanity, Newark Star-Ledger sports columnist Steve Politi wrote for CNN that Lin had fans thinking of the Knicks teams of the '70s, coached by Red Holzman.

"The championship Knicks of 1970 and 1973 had plenty of talent - there were a combined six Hall of Famers on their rosters ... but they put aside their egos for the betterment of the team," Politi wrote.

Woodson, too, harkened back to Holzman, whom Woodson also played for, when discussing the 2012 Knicks on Thursday.

"He taught me that rookies were to sit and listen and learn," Woodson is quoted as saying in the New York Daily News. "That taught me a valuable lesson, I think, way back when."

The papers reported that Lin, who is really a second-year player, remains a starter for now, but they also point out that if Woodson wants the younger Lin to sit, he has a veteran in former All-Star Baron Davis to whom he can turn. Or Mike Bibby, who played for Woodson when he coached the Atlanta Hawks.

Howard Beck, writing in the Times, points out that Woodson may not have time to figure out if Lin is a good fit for the new Knicks.

"With Dâ€™Antoni gone and Anthony back in the forefront, Lin may never get the same opportunities to shine," Beck writes. "The Knicks have no room for error, nor does Woodson, who is coaching for a contract and the permanent job."

The firefly, or lightning bug, has a lifespan of two months, according National Geographic. It seems highly questionable whether Jeremy Lin can shine that long.

A mummy estimated to be between 800 and 1,200 years old has been unearthed by archeologists in Peruâ€twitter.com/i/web/status/1â€¦cY
cnni