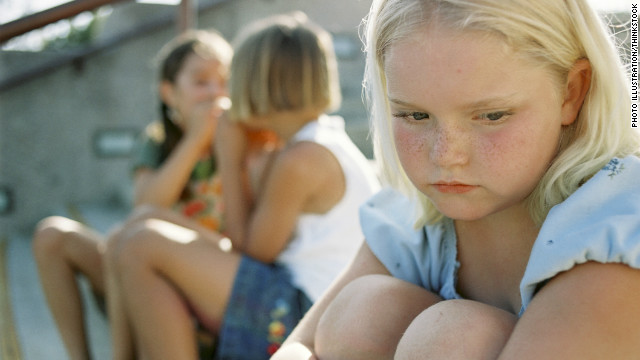 CNN is putting forth a series exploring the true meaning of beauty, and the latest story is about the attitudes children have toward weight issues (both their own and others').

Fat is the new ugly on the playground

Many of our readers commented and said, hey, that's been going on for as long as children have been children.

Eric: "Fat is not the new ugly. Fat is the original ugly. When I was a kid, fat kids were automatically considered ugly. I'm not saying this to be mean. Children are very primal. They are not politically correct, and are quick to be critical about irregularities. A slight blemish on an apple is enough to make them not want to eat it. As we grow up, we learn to ignore our predisposed prejudices and focus on what is important."

This person could relate to being taunted as a child, and hopes her 10-year-old daughter won't have the same problems.

ibtia32: "Fat is not the 'new' ugly. It's been a source of misery amongst kids for years. I was persecuted in school 25 years ago for being overweight, to the point that I would beg my mother to let me stay home. I have awful memories of childhood and worry every day that my 10-year-old daughter may at some point deal with the pain I once did. Ironically, I am a much stronger person because of it and always pay attention to the ones others show less to. I would have given anything back then to have just one person tell me it was OK to be me."

But this person said they were motivated to become better after the teasing they got.

JPeterson2: "This is a nice perspective on an issue facing children today, however, this is in NO WAY a new issue. I was ridiculed as a child for being overweight. How did I deal with it? I learned to have a sense of humor and be quick on my feet. I became the class clown and kept from feeling down. People have made fun of people for being fat for a long, long time. I can guarantee that a few of those who comment on this article were either called fat or called others fat. So it goes with a self-interested society."

Another person noted that they only became overweight fairly recently, and noticed a difference.

Chrissy333: "I've been a healthy weight most of my life. I have always had to work hard to keep my weight down. I had three children in my 30s and am now overweight and can't seem to lose it. I hate being overweight because I don't feel like myself anymore. People treat me differently and it has been a real eye-opener. It has made me realize how fake and superficial most people are and has made me realize who my true friends are. I am losing weight for my health, not for appearances or to impress others. Young girls need to be taught to be healthy (not superskinny) and to value themselves for who they are even if they are overweight. Belittling someone for being overweight doesn't help them lose weight. It only makes them more depressed and isolated. They need encouragement, not immature bullying."

One reader shared a story of a young family member battling an eating disorder.

doodlebug20: "I have a 10-year-old cousin who was recently diagnosed with anorexia. She's losing a pound a day, her hair is falling out, etc. At first, we thought her many food allergies were the culprit, because there are already many foods that she can't eat. Eventually, we learned that because her mother is always obsessing over her own weight, this child now refuses to eat anything because she's afraid of getting fat herself. It's so sad to know that adults and children are so obsessed with outer appearance. Children need to be reminded again that having a good personality and attitude about oneself is more important."

Others noted that personal responsibility plays a role.

JerseyEer: "Let's just start telling our children that it is perfectly fine to be 50, 60, 100 pounds overweight. We overprotect and coddle children in this country so much it's no wonder they snap and go on shooting sprees in school when they face the reality that life is tough sometimes, not always fair and they're not the absolute best at everything they do. You can't cut a kid from sports anymore because it might hurt their feelings, dodgeball is illegal in gym class because it's too violent, parents let their children act like wild animals in public with zero repercussions and now we're to tell them it's OK to be fat!? Being fat IS bad, it's unhealthy, leads to diseases and will kill you. We are raising a bunch of self-absorbed, arrogant, fat kids who have a sense of entitlement that is off the charts."

And then there was this reader, who had a little success story.

TexDoc78154: "I was teased in high school, and again at the 10-year reunion. Didn't bother with 25th, but have lost 75 pounds and make more than almost all of them. Living well is the best revenge."

Can you relate? Share your opinion in the comments area below and in the latest stories on CNN.com. Or sound off on video via CNN iReport. Be sure to let us know what beauty means to you.