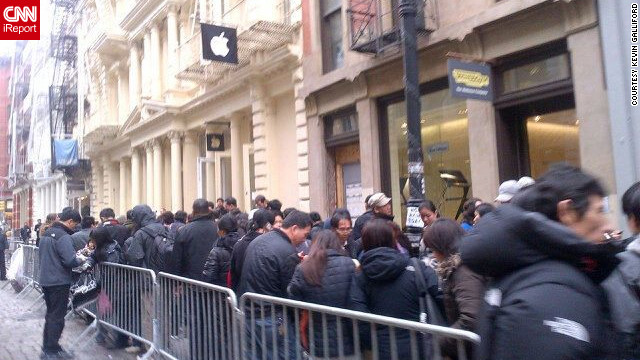 Overheard on CNN.com: Wait in line? For an iPad? Tablet trend irks some readers

Two of the most talked-about topics today are the new iPad going on sale and reaction to the preview of the tablet-friendly Windows 8 operating system. Some readers are quite excited and some are not.

iReporter Kevin Galliford took the photo shown at the top, depicting the long line of customers waiting to purchase the device at an Apple Store in New York. And Harry Crosland of Columbia, Maryland, says he managed to be 35th in line and talked to the guy who was first. Crosland shared his initial impression of the device:

"The iPad, from a precursory glance, is nearly indistinguishable from the iPad 2. I feel no difference in the weight or size of it. As a matter of fact, my old case (I bought a front and back protector for the iPad 2) fits my new one perfectly. The Retina Display is definitely noticeable and some pages seem to load up a bit faster."

Apple devices have an uncanny ability to polarize our tech readers, and the new iPad is no exception.

This reader is a fan.

DRinNC: "I'm taking my grandson to the Apple store today because he wants to come along when I get my new iPad, little does he know that he's walking out with one too. Say all the bad things you want about Apple and it's fans, but the look is his face will be priceless."

But this one wasn't so sure.

epdm: "How many of the chumps lining up for iPad 3 also lined up for iPad 2? And iPad 1? How many will line up for iPad 4? Apple has a whole lot of suckers on the vine."

User Angry Deuce is not a fan of the new operating system from Microsoft, or of the tablet phenomenon. This reader and several others said serious work requires a serious computer.

"Windows 8 is going to be the new Windows ME. Leave the tablet space to Android and iOS. Microsoft has 95% of the PC OS market. Windows 7 is their best release since Windows XP. Whoever is telling Microsoft that they need to focus on tablets is an idiot. People that have to do real work on a computer will ALWAYS have a PC, and serious gaming is never going to happen on a tablet. The interface is just not made for it. No, 'Angry Birds' is not serious gaming."

Other folks talked about Apple users, either expressing criticism of them or speaking in defense.

Merréll O'Brian: "I couldn't help but laugh when Apple users comment that 'Windows 8 is a toy!' Really? iPads are nothing but a toy! Whatever! Apple isn't making any market share increases against the PCs. I work for an organization which has 30,000 PCs. It's a subcategory of an organization which hosts 120,000 PCs. Last order for replacement was to Dell, not Apple. So, Mac users can sit at home or Starbucks and play with their toys. In the real world, ALL servers are Windows or Linux and nearly all workstations are still PCs."

skydreamer07: "Actually, Mac is making market share over PCs every year. ... I've been using my 2007 MacBook Pro for software development (Java) in all of the 5 years that I've had it. We had a Mac server at my last job. Mac makes a way more stable server than windows with support for all the standard UNIX services/languages that are expected from a UNIX server. So don't speak of mac users and how they use their Macs when you clearly don't know much about how things are done outside of your organization."

What do you see for the future of computing? There are a lot of different views on this.

During a speech at South by Southwest in Austin, Texas, futurist Ray Kurzweil said that he believes that man and his devices will someday merge into a "human-machine civilization" where things are tightly intertwined.

Commenter BuffaloGuy did not agree with the aforementioned premise, and said he believes hardware is progressing rapidly, and yet at the same time, making software remains challenging. He also said the Internet is "the most significant piece of software in the last 30 years," and yet can't be compared to a human.

"Computers as intelligence is a misnomer," he said. "Only people or really programmers make the hardware do anything.'"

But on the other hand, suppose computers did become more human. What would we call them?

James Todd: "Right now, 'human' means 'self-aware,' but when other forms of consciousness become self-aware, then 'human' will not be large enough a word, and humans will be just one form of sentient life. We will have to change how we see ourselves, because if someone is sentient that won't necessarily mean they're human. Then 'self-aware' will be the larger blanket term for sentience, rather than 'human.'

csam18: "I think it'll be considered a synthetic being instead of a human being. But then again he's speaking of us merging with technology so it'll most likely be something in the realm of a humanoid."

What do you think about the new devices and software, and what lies ahead in the future? Join the conversation in the latest stories on CNN.com. Or share your story through photos and video via CNN iReport's Tech Talk.