The World Health Organization is calling for a delay on vaccine booster shots as hundreds of millions still wait fo‚Ätwitter.com/i/web/status/1‚Ä¶2V

The Delta variant now accounts for an estimated 93% of coronavirus cases in the US. The number is even higher in so‚Ätwitter.com/i/web/status/1‚Ä¶w5

A British marine tracking agency has reported a ‚Äúpotential hijacking‚Äù incident off the coast of the United Arab Etwitter.com/i/web/status/1‚Ä¶DKohFa 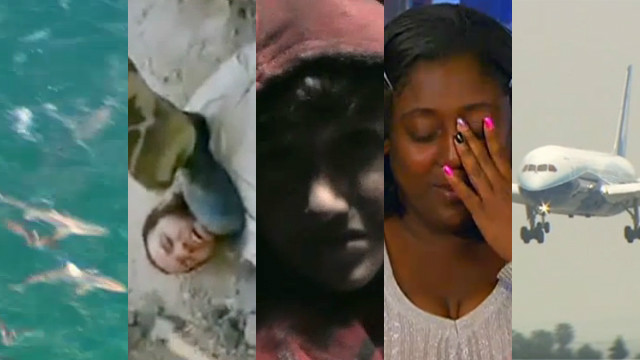 The top videos on CNN.com this week featured a jaws-like shark swarm, a new high-tech Dreamliner, the story of a mother's dramatic reunion and some horrifying video of torture and death in Syria as the uprising there reaches the one year mark. Click below to see the videos that impacted so many others this week.

A rescue helicopter captures video of more than 50 sharks on a feeding frenzy off the coast of Perth, Australia. Check out the video as the massive sharks swarm one another in a fit of nautical mayhem.

Graphic video shows a man being tortured, allegedly by Syrian soldiers. CNN's Arwa Damon speaks to survivors who talk of "coming back from hell" after facing torture at the hands of Syria's government.

A rescue operation set out to recover the bodies of a massacred family reveals a surprise - a lone child hiding among his dead relatives for nearly a week.

Auboni Champion-Morin, whose son was found after being kidnapped 8 years ago, describes how she felt after hearing her son is still alive after such a long time.

Get a behind the scenes look at Boeing's new 787 Dreamliner and see the massive plane before it hits the skies. Does the new Dreamliner live up to the hype? You be the judge.

While nations such as China, Japan and South Korea are seeing growing outbreaks, the sharp edge of the Delta wave i‚Ätwitter.com/i/web/status/1‚Ä¶ru
cnni

9:27 pm ET August 4, 2021 RETWEET
Mexico has filed a lawsuit against 11 gun manufacturers over firearms that flow from the US across the border and i‚Ätwitter.com/i/web/status/1‚Ä¶Bx
cnni

9:14 pm ET August 4, 2021 RETWEET
"This virus is highly infectious. If you decide to try to run the game clock out, don't try to do it. This virus wi‚Ätwitter.com/i/web/status/1‚Ä¶sh
cnni

8:58 pm ET August 4, 2021 RETWEET
Simone Biles has tweeted thanks to a Japanese gym for allowing her to privately train while she attempted to regain‚Ätwitter.com/i/web/status/1‚Ä¶aQ
cnni