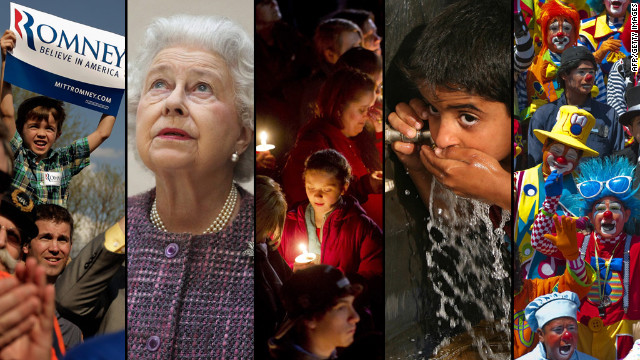 Ahead of the curve: The next seven days

One of the larger delegate prizes is up for grabs in Tuesday's Illinois primary. The four Republican candidates will slug it out for the state's 54 delegates to the party's national convention in July.

Flagging frontrunner Mitt Romney on Sunday called himself the "economic heavyweight" in the field, while referring to closest competitor Rick Santorum and President Barack Obama as "lightweights."

For his part, Santorum took to CNN's "State of the Union with Candy Crowley" to slap at Romney's inability to put his competitors away despite vast financial resources: "When you have this amount of resources and this amount of advantage, (yet) you can't manage and deliver the mail and win this nomination, that shows a real weakness in his ability to be able to govern," Santorum said.

Former House Speaker Newt Gingrich has been concentrating on the March 24 Louisiana primary, including a tour of the Audubon Zoo in New Orleans on Friday.Â  â€śWith both Santorum and me, (Romney is) now confused as to who he is attacking. It's his only technique," Gingrich said. "I tell people he's like a 4-foot-8 guy who wants to play center and his only technique is to shrink the others, which I think bodes very badly for a general election."

The fourth man in the race, Rep. Ron Paul, is far behind in the delegate count and spent more money than he took in during February. Paulâ€™s self-reported spending of $3.54 million outpaced his fundraising of $3.27 million, and he ended the month with $1.36 million in the bank. His campaign reported carrying no debt.

Great Britain's Queen Elizabeth II is scheduled to deliver a speech to both houses of Parliament on Tuesday. It is expected to be the only time she will publicly acknowledge her Diamond Jubilee, the 60th anniversary of the beginning of her reign. (Plenty of others are talking about it, though, including soccer megastar David Beckham.)

The 85-year-old monarch's appearance will follow by one day the first official speech by the Duchess of Cambridge, the former Kate Middleton. The bride of Elizabeth's grandson Prince William will speak at the formal opening of a children's hospice facility in Ipswich, England. The popular duchess will also plant a tree, tour the facility and meet patients, parents and staff members.

The two royals attended a fashion show together last week.

T.J. Lane, the 17-year-old student accused of shooting six of his peers last month at a high school in Ohio, was scheduled to appear in court Monday for a hearing on whether he should be tried as an adult, but that proceeding has been pushed back to April 3.

Three students were killed, two were seriously wounded and one was grazed in the shooting February 27 in the cafeteria of Chardon High School in Geauga County, 30 miles east of Cleveland.

Lane faces three counts of aggravated murder, two of attempted aggravated murder, and one count of felonious assault. The case is currently in juvenile court; the April 3 hearing will discuss a prosecution motion to move the case to adult court.

Raise a glass on Thursday to toast World Water Day, and be thankful that you can. The theme of this year's United Nations-sponsored event is water and food security. Its slogan is "The world is thirsty because we are hungry."

"Over the coming decades, feeding a growing global population and ensuring food and nutrition security for all will depend on increasing food production," Secretary-General Ban Ki-moon said. "This, in turn, means ensuring the sustainable use of our most critical finite resource â€“ water."

Despite the presence of hundreds, if not thousands of attendees, parking is not expected to be a problem, given clowns' legendary penchant for car-pooling.

Olaf Scholz has some big shoes to fill. The German Finance Minister has the best shot at forming a new German goveâ€twitter.com/i/web/status/1â€¦iL
cnni

11:30 am ET September 27, 2021 RETWEET
Comic and animation fans in China were in for a nasty shock this weekend as authorities turned their crackdown on tâ€twitter.com/i/web/status/1â€¦ux
cnni

11:29 am ET September 27, 2021 RETWEET
Australian Prime Minister Scott Morrison said he might not show up at the COP26 climate talks in Glasgow this Novemâ€twitter.com/i/web/status/1â€¦SY
cnni