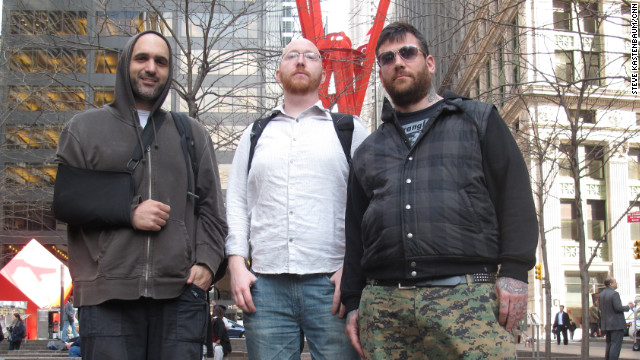 The attempt to re-occupy Zuccotti Park and subsequent arrests of dozens of protesters in New York over the weekend was the start of what Occupy organizers said will be a comeback for the movement this spring and summer. But some city and state governments, armed with new ordinances specifically aimed at the Occupy movement, are ready to prevent demonstrators from re-establishing encampments.

Police in New York put 74 people in handcuffs Saturday night as protesters tried to establish a foothold in the birthplace of Occupy Wall Street, a public plaza in the heart of the financial district. The move followed a week during which protesters tried to occupy several Bank of America branches in New York and more than 100 people demonstrated outside a Mitt Romney fundraiser at the Waldorf Astoria Hotel.

“Clearly the Occupy movement as we’ve known it - that is sort of occupying public spaces around government structures - is facing a stronger legal challenge,” said Gene Policinski, executive director of the Washington-based First Amendment Center, a self-described nonpartisan think tank that educates people about issues surrounding the First Amendment.

Cities around the country are making it more difficult for Occupy demonstrators to set up shop on public land. In Atlanta, the City Council is clarifying rules for local parks by banning things such as tents and plywood. Idaho and Tennessee state legislatures banned camping on public property not designated as a camp site.

A large turnout is also expected at the Republican National Convention in Tampa, Florida, in August and the Democratic National Convention in Charlotte, North Carolina, in September. Some of the protesters' tactics may not be tolerated, Policinski said, and protesters could be arrested in groups of 400 to 500 and detained for up to two days while police "say they’re sorting out who is actively involved and who is not."

Policinski said that such mass arrests could result in the bulk of Occupy demonstrators winding up in custody while the conventions go on unscathed.

In Charlotte, city officials are prepared to allow protesters to march and hold rallies around the Democratic convention, but camping overnight on public land is out of the question.

“We did not have a prohibition on camping on city property before the Occupy movement came along,” city attorney Bob Hagemann said. “In late January, after a public input process, our City Council passed a couple of ordinances, one of which did prohibit camping.” Soon after, tents and other structures were removed from a local plaza, and the Occupy movement ended its 24-hour presence in the city.

Tampa officials will take a similar approach around the Republican convention.  Occupy organizers are not deterred.

“You’re seeing a lot of folks who are both planning for enormous mass actions and also smaller, little affinity actions,” said Haywood Carey, one of the principal organizers of Occupy Wall Street.

Amin Hussein, who has been involved in organizing Occupy protests in New York since Day One, said activists have a better sense of where the movement is heading in the coming months.

“We spent a lot of time getting to know each other better and building a sense of community. We’re able to communicate better, and there’s an element of trust and coordination,” Hussein said.

They have less money to work with than they did at the height of the movement though. At a recent Occupy Wall Street general assembly in New York, it was announced that the group has less than $45,000 in its general fund.

But Carey said money is not a factor.

“We were doing what we did before we had money. We’re going to continue doing (it) whether or not we have money," he said.