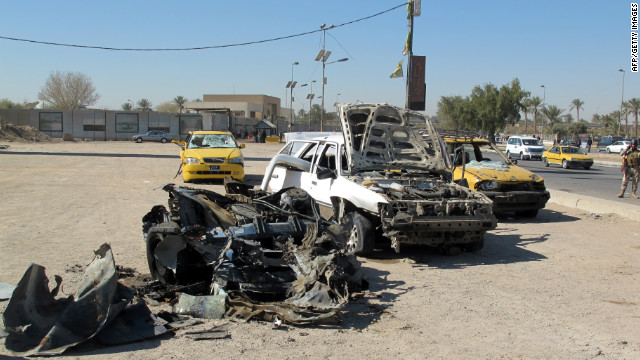 Destroyed vehicles at the site of a car bomb set off by a suicide attacker in the center of Baghdad on Tuesday.
March 20th, 2012
02:39 AM ET

A spate of car bombings rocked Iraq on Tuesday, on the the ninth anniversary of the U.S. invasion of Iraq.

The violence left at least 10 dead and 59 injured in Baghdad, Hilla and Kirkuk.

No one immediately claimed responsibility for the attacks.

And in Hilla, about 100 kilometers (62 miles) south of Baghdad, another car explosion injured seven people.

Iraqi officials have expressed concern that the continuing violence could cast a shadow as Iraq prepares to host the next Arab summit on March 29.

The government said last month that logistical and security arrangements had been agreed upon for the event.

The attacks on Tuesday come nine years to the day that a U.S.-led army invaded Iraq on March 20, 2003, toppling longtime dictator Saddam Hussein.

A woman who's never been to Ireland wakes up with an Irish accent. CNN's Jeanne Moos reports.ŌĆtwitter.com/i/web/status/1ŌĆ”S8
cnni

12:31 am ET May 14, 2021 RETWEET
The top Republican on the House Foreign Affairs Committee is calling on the Biden administration to enact sanctionsŌĆtwitter.com/i/web/status/1ŌĆ”0i
cnni

12:01 am ET May 14, 2021 RETWEET
Maldives has banned tourists from South Asia, cutting off an escape route for wealthy Indians fleeing their own couŌĆtwitter.com/i/web/status/1ŌĆ”EG
cnni

11:21 pm ET May 13, 2021 RETWEET
ŌĆ£The science is ŌĆ” very clear about unvaccinated people," she said. "You remain at risk of mild or severe illness twitter.com/i/web/status/1ŌĆ”JoLOtm
susancandiotti

10:56 pm ET May 13, 2021 RETWEET
ŌĆ£Under Armour agreed to pay $9 million to settle the claims without admitting or denying the charges. Neither Planktwitter.com/i/web/status/1ŌĆ”VprZ
susancandiotti