Michigan authorities search the home of the man accused of helping the alleged school gunman's parents and the manŌĆtwitter.com/i/web/status/1ŌĆ”tA

Marc Short, the former chief of staff to Vice President Mike Pence, is cooperating with the January 6 committee, acŌĆtwitter.com/i/web/status/1ŌĆ”Pi

California Republican Rep. Devin Nunes will leave the House in the coming weeks to pursue a new opportunity, the coŌĆtwitter.com/i/web/status/1ŌĆ”f1

The Justice Department closes a second investigation into the infamous 1955 killing of Emmett Till after failing toŌĆtwitter.com/i/web/status/1ŌĆ”76

Actor Jussie Smollett has taken the stand in his own trial over accusations he lied to police about an alleged hateŌĆtwitter.com/i/web/status/1ŌĆ”Lp

Three more hostages from a missionary group kidnapped by a Haitian gang in October have been released. Two others wŌĆtwitter.com/i/web/status/1ŌĆ”xo 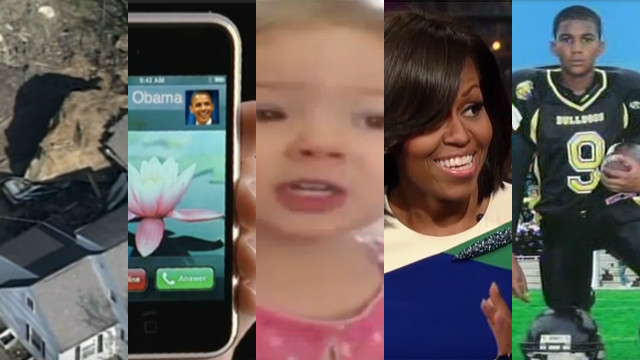 The most popular videos on CNN.com were led by an enormous boulder that smashed into a house. The other top videos consisted of a political confrontation from Bristol Palin, a toddler belting out Adele, the first lady's secret shopping trip and Trayvon Martin's father recalling his sons last moments.

What would you do if a 100 ton boulder came barreling towards your house? This video shows the aftermath of a massive boulder that took out cars, power lines and part of a home.

Bristol Palin writes a letter to President Obama asking for a phone call. Watch the video to see what she wants to talk to him about.

A toddler singing Adele's "Someone Like You" is taking the viral video world by storm. Even though she probably hasn't dealt with much heartbreak, her rendition is quite emotional.

Dad sure cries on 911 are son, Trayvon

Trayvon Martin's father tells Anderson Cooper about the heartbreak of hearing his son's voice before he died.