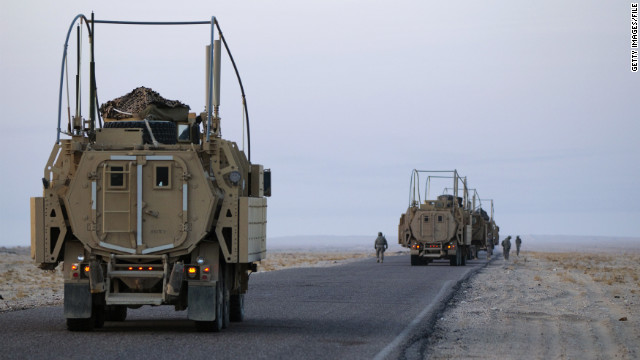 The MRAP was in a long convoy of vehicles that crossed the Iraqi-Kuwaiti border December 18 when the last U.S. troops exited Iraq.
March 24th, 2012
03:21 PM ET

Opinion: Saying goodbye to a symbol of the Iraq war

Editor‚Äôs Note: Moni Basu is a reporter for CNN. She covered the Iraq war for The Atlanta Journal-Constitution.

The last of America's mine resistant vehicles out of Iraq boarded a ship in Kuwait on Saturday, bound for Fort Hood, Texas. There, it will be displayed at the 1st Cavalry Division Museum, forever a symbol of the Iraq war.

The Mine-Resistant Ambush-Protected vehicle - known simply by its acronym MRAP in typical military fashion - was in a long convoy of vehicles that crossed the Iraqi-Kuwaiti border December 18 when the last U.S. troops exited Iraq.

I remember when the MRAPs were newly introduced in Iraq. They were a fresh hope of survival for American men and women.

Staff Sgt. Jamie Linen used to transport soldiers and run supplies every day from Baghdad's Forward Operating Base Falcon to nearby patrol bases where surge troops of the 3rd Infantry Division were based. Linen, like all other soldiers, thought about the risks of bombs hidden along the roads every time he rolled out the gate. They were, after all, the No. 1 killer of American troops in Iraq. The first MRAP arrived for Linen's unit in November 2007, months after President Bush ordered a "surge" in troops to defeat a raging insurgency. The shiny trucks were the new stars of the military then.

The soldiers were glad to get out of the backs of hot, uncomfortable Bradley Fighting Vehicles or the less-protected Humvees and step up high into the cab of a sophisticated MRAP. Made by International, the $658,000 trucks sat high on the road - 36 inches off the ground - and came with a V-shaped hull that helped deflect the impact of an improvised explosive device.

The walls of the truck were thick. The design was state of the art. The only thing they were missing, a soldier joked, were cup holders.

END_OF_DOCUMENT_TOKEN_TO_BE_REPLACED

A top defector from the Syrian military is urging armed rebel groups to align and follow the leadership of the Free Syrian Army.

Uniting all efforts will strengthen the anti-government movement and safeguard the nation, Brig. Gen. Mustafa Sheikh said in a video posted on YouTube on Saturday.

Sheikh was the first brigadier general to announce his defection from President Bashar al-Assad's forces. He was accompanied in the video by Free Syrian Army commander Col. Riad al-Assad.

The move addressed a key concern for observers of the Syrian crisis both inside and outside the country - that armed rebel groups were disjointed and divided.

"The division is over. All the parties involved in the revolution carried out all the efforts to form one united front to better represent and defend the Syrian people," Free Syrian Army Lt. Riad Ahmed said. "In the past, there were some minor technical disagreements, but this is all behind us from now on."

11:00 pm ET April 10, 2021 RETWEET
The Office of the United Nations High Commissioner for Human Rights said it has asked the UAE for "proof of life"‚Ätwitter.com/i/web/status/1‚Ä¶zY
cnni

10:01 pm ET April 10, 2021 RETWEET
Nearly 40% of US Marines are declining Covid-19 vaccinations, according to data provided to CNN by the service, the‚Ätwitter.com/i/web/status/1‚Ä¶KL
cnni