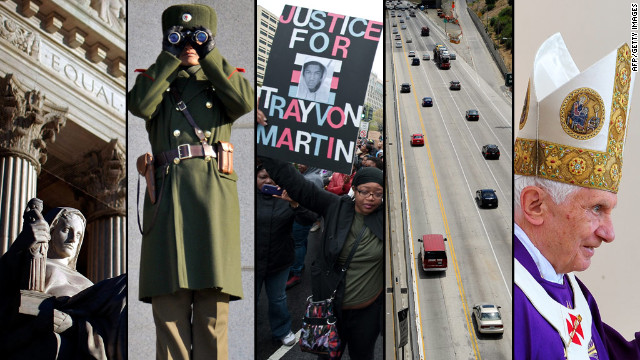 The U.S. Supreme court is about to take on what legal observers say is one of the most important cases it has heard in years: the 2010 health care reform law.

The court will hear oral arguments Monday through Wednesday on the law's constitutionality. The court's eventual rulings this year will "not only guide how every American receives medical care but would also establish precedent-setting boundaries of government regulation over a range of social areas," CNN Supreme Court Producer Bill Mears writes.

Among the key issues: The constitutionality of the individual mandate - the requirement ofÂ nearly every American to purchase some level of insurance or face a tax penalty of up to about $700 a year; and whether other parts of the law can survive if the mandate is struck down.

The law, among other things, wasÂ designed to help millions of uninsured and underinsured Americans receive adequate and affordable health care through a series of government-imposed mandates and subsidies. The federal government will tell the court that 45 million Americans last year lacked health coverage, roughly 15% of the country's population.

Critics have equated the measure to socialized medicine, fearing that a bloated government bureaucracy will result in higher taxes and diminished health care services.

Top officials from 54 countries will meet in South Korea on Tuesday for an international nuclear security summit to discuss how to secure the world's nuclear material and prevent nuclear terrorism. U.S. President Barack Obama will attend.

The message of international cooperation, however, is being somewhat overshadowed by grumblings over North Korea's planned launch next month of a long-range missile, which North Korea says is to carry a satellite into space.

South Korea has said it considers the satellite launch an attempt to develop a nuclear-armed missile, and that the launch would violate a U.N. Security Council resolution that bans the testing of the technology being used in the rocket-powered satellite. The United States has warned the move would jeopardize a food-aid agreement reached with Pyongyang in early March. In that deal, North Korea agreed it would not carry out nuclear or missile tests in return for food aid.

END_OF_DOCUMENT_TOKEN_TO_BE_REPLACED

Bringing a federal hate crime charge against a neighborhood watch volunteer who fatally shot Trayvon Martin will be "a challenge, to put it lightly," the victim's lawyer said.

Daryl Parks, an attorney for the Martin family, told board members of the National Association of Black Journalists (NABJ) on Saturday that prosecution on the state level stands a better chance.

"Most state laws tend to be better for the prosecution of state crimes. And that's why we see the federal authorities expressing, although gently, in their statements that they can only do so much if there's some type of race statements involved. The state officials don't have that problem," Parks said.

"I think the focus is not necessarily a federal arrest over a state arrest. We want an arrest, period. And I think that the state aspect of that is the one that's most feasible, most attainable in this matter."

Meanwhile, worshipers in cities across the country will wear hoodies to church Sunday in honor Martin, who was wearing a hoodie when he was killed.

U.S., Turkish leaders agree on next steps on Syria

The United States and Turkey are in "full agreement" on the next steps on Syria as world leaders continue trying to stop the year-long massacre that has killed thousands.

The meeting was aimed at "syncing up" with Turkey - a former Syrian ally - before Istanbul hosts the next "Friends of Syria" meeting on April 1, a senior Obama administration official said. A goal of that conference is to exert pressure on Syrian President Bashar al-Assad's regime for its brutal crackdown on civilians.

Obama and Erdogan expect the upcoming conference to enhance ways to provide "non-lethal" aid to the opponents of the Syrian regime, such as medical supplies and communications equipment, said Ben Rhodes, a U.S. deputy national security advisor.

Officials at Mississippi State University are expected to release more information Sunday about a 21-year-old student who was fatally shot in a campus dorm room.

The shooting took place late Saturday night in a room at Evans Hall, a dorm for male students in the northwest side of campus, said Bill Kibler, vice president for student affairs at the Starkville school.

The victim, whose name was not released, was shot more than once. He was taken to a hospital, where he died, Kibler said.

Three men were seen fleeing the area in a blue sedan, he said. The suspects did not appear to be university students, he said.

The shooting prompted the school to send out a campus-wide alert through a series of text messages.

The explosion occurred Saturday in the village of Kuhak in Arghandab district, Shah Muhammad, the district chief administrator, said. The district has long been considered a Taliban stronghold, and it neighbors the Panjwai district where an Army staff sergeant allegedly went on a shooting rampage that left 17 people dead.

Six members of the Afghan police, a translator and a U.S. soldier were killed Sunday, Muhammad said. The district's police chief, Niaz Muhammad, confirmed the number of casualties.

Senegal President Abdoulaye Wade faced off Sunday against his protĂ©gĂ© in a runoff election after he failed to win a majority during last month's controversial election.

The 85-year-old Wade, who is seeking a third term, is running against his former prime minister Macky Sall.

The two survived a field of 14 candidates during the February 27 election, with Wade receiving 32% of the vote and Sall getting 25%. Sall garnered support of several of the failed candidates, who vowed solidarity against Wade.

With 5.3 million voters registered in the country, early turnout was heavy with large crowds waiting to vote in the capital city of Dakar.

The head of the European Union Observer team, Thijs Berman, said early voting was going well and there were no signs of fraud.

An Iraqi woman who was left brutally beaten in her Southern California home with an apparently xenophobic note beside her has died.

Shaima Alawadi, a 32-year-old mother of five, was taken off life support Saturday, said the Council on American Islamic Relations (CAIR), an organization that advocates for Muslim civil liberties.

She had been on life support since Wednesday when her teenage daughter found her unconscious in the living room of their home in El Cajon in San Diego County.

"During the initial stages of this investigation, a threatening note was discovered very close to where the victim was found," Lt. Mark Coit of the El Cajon police said.

Authorities would not specify what the note said. But Alawadi's daughter said it threatened the family to go back to Iraq and called them "terrorists."

Police said a similar note was left outside the family home earlier in the month, but the family did not report it