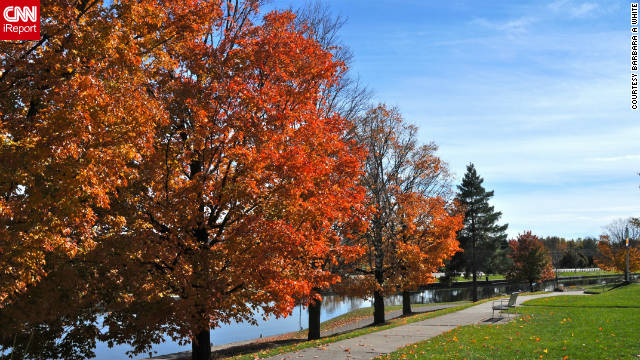 Barbara A. White took this photo of maple trees along the Otonabee River in Peterborough, Ontario.
March 26th, 2012
08:18 PM ET

People always joke that they are going to move to Canada if XYZ happens. Turns out that the top court in the province of Ontario has legalized brothels, saying Canadian prostitution laws unfairly discriminate against prostitutes and their ability to work in safe environments. So our readers are contemplating whether to stay or go.

prairiedoc: "Our Canadian cousins seem to look at the world in more practical ways. While we have politicians who want to regulate woman's bodies, prohibit contraception and otherwise tell us what morality we're to follow or what we can or can't do in our homes, our northern friends have taken a bite out of crime by letting prostitutes legally ply their trade. Couple this decision with Canada's health care program and you have a country and government that makes the US seem to be in the dark ages!"

Some made comparisons to current affairs in the states.

There goes the neighborhood?

Guest: "I don't frequent prostitutes, or and it's not a profession I would want anyone in my family to be associated with, nor would I want a brothel in my neighborhood (a very practical consideration). However, it is, no doubt, true, that allowing brothels to operating legally will make prostitution, which will exist whether we want it to or not, safer."

thatguyhere1: "That's really the reasoning behind our original laws. The whole 'bawdy house' restrictions, and "solicitation" are about keeping up appearances and not being hassled by potentially unethical behavior. Nobody wants to have that sort of thing operating publicly next door, with giant signs and some guy handing out fliers in front. As for the act itself, Canada has never really been too active in preventing it, so long as you're not drawing too much attention, involving someone underage, or assaults/pimps are involved. They've been trying to get a red light district approved for quite some time, this is a step in the right direction."

Bruce33315: "An unanticipated result of not having such an establishment in one's local neighborhood could be the continuation of non-brothel prostitution in one's neighborhood, which is more prone to crime and so on than having a local establishment. As for property values, business and so on, they can only go up as the businesses prosper. Who would want to patronize a sleazy establishment? Competition in the business will improve general quality of venues, as the business goes upscale to compete with others."

sxj016: "I've visited Canada twice in my life. It's the greatest nation on earth. That's coming from a U.S. citizen. I'd give anything to be a Canadian."

Guest: "Get the heck outta here and go there then. What's stopping you?"

gweed123: "If Santorum wins the Republican nomination, and somehow wins the White House, I fully expect a surge in immigration applications to Canada. And yes, we would welcome you."

Chartreuxe: "It's fairly easy to emigrate to Canada. If you really want to move there and become a citizen, the process isn't difficult. What's with all the hate-ons about leaving the US? We have a huge number of American citizens who have dual U.S.-Canadian citizenship. Educate yourselves. There's no need to be so foolish and ignorant."

What do you think about brothels? Canada? Ontario brothels? Share your opinion in the comments area below and in the latest stories on CNN.com. Or sound off on video via CNN iReport.